Salmon and trout (the salmonids) across the Pacific Northwest are known for their table fare and prodigious sport fishing. In addition, many salmonids are declining because of overfishing and/or lack of adequate spawning habitat, making them a fish of high conservation concern. An anadromous fish, Coho Salmon (Oncorhynchus kisutch; Figure 1) migrate up rivers to spawn. The juveniles then spend from one- to two-years in freshwater feeding and growing before migrating back to the ocean. While in freshwater, Coho Salmon of the Pacific Northwest typically reside in cold, clear streams and rivers that are typical of the region (Figure 2). During periods of high flow (typically winter) these rivers and streams may have higher concentrations of suspended sediment (turbidity). Furthermore, burned areas from wildfires lead to more turbid streams where surface erosion of  surrounding soil and lack of vegetation leads to more suspended sediment in the water. Increasing fire frequency and severity along with anthropogenic land disturbances (e.g., urban development, agriculture, logging) can result in predominantly clear streams becoming turbid. The effect turbidity has on salmonids and fish in general has been mainly researched in laboratory settings, however, there is evidence that reduced visibility caused by turbidity may reduce food consumption (and therefore growth) in salmonids. In addition, increases in turbidity are thought to cause salmonids to switch from feeding on drifting aquatic insects to aquatic insects living in the substrate (on the bottom). These effects have relatively unknown consequences for growth of Coho Salmon, and salmonids in general. 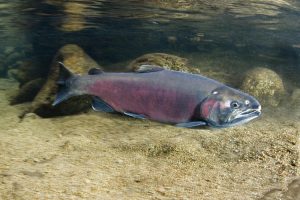 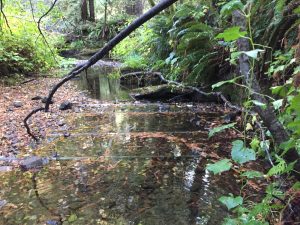 Douglas Martin from Martin Environmental and fellow researchers from R2 Resource Consultants, Catchment Aquatic Ecology, and Lyme Redwood Forest Company assessed the impacts of seasonal turbidity on Coho Salmon growth in northwest California (Figure 3 and 4). During the summer low-flow period they captured juvenile Coho Salmon from three sections of the Pudding Creek watershed using beach seines during 2015 and 2016 (Figure 5). Next, PIT (Passive Integrated Transponder) tags were inserted into each fish in order to uniquely identify each juvenile Coho Salmon. Movement of tagged fish was tracked continuously over the winter study period with PIT detection antennas (Figure 2 and 3) and  individual growth was determined from recaptures of out migrating smolts at a rotary screw trap (Figure 6).  The researchers monitored turbidity continuously at the same stream sections where they collected fish. Collectively, these data were used to mathematically model the effects of turbidity on the growth rates of juvenile Coho Salmon in the Pudding Creek watershed. 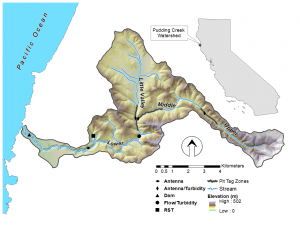 Figure 3. Pudding Creek Watershed showing the study site and placements of the various components of the study. Dams and rotary screw traps (RST), used to capture juvenile Coho Salmon, are marked with a triangle and square, respectively. Credit: Douglas Martin 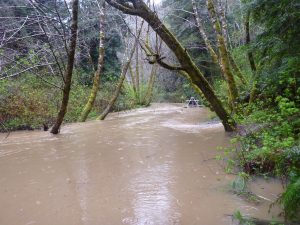 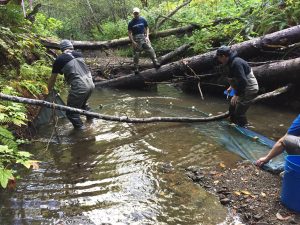 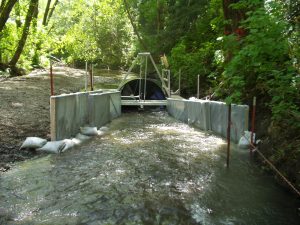 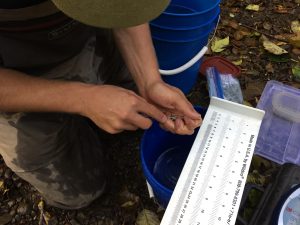 The researchers found that low to moderate levels of turbidity (from approximately clear to tea colored) lead to more growth than higher turbidity levels (water resembling chocolate milk), where Coho Salmon grew less. However, the results indicated it was not that simple. Growth rate varied depending on the duration of exposure at a given turbidity. In other words, Coho Salmon grew less when exposed to higher turbidity levels for long periods of time.

The researchers showed that in a natural system, the effects of turbidity may be complicated by other factors like temperature and duration of exposure. Furthermore, they highlighted the complexity of natural systems and showed that turbidity alone is not a reliable predictor of fish growth. With a changing climate and human effects on stream habitat, such information is essential for developing management strategies to protect and maintain the future of these fish populations.