Biologists use models to predict where fish are and how they respond to changes in their habitat. Many models predict changes in abundance of aquatic animals as a function of hydraulic (e.g., current velocity, water depth), substrate (e.g., rocks, sand, gravel), or thermal (temperature) characteristics that are unchanging. These models also do not generally consider how individual fish of the same species might vary from one another in their habitat preference, despite growing evidence that suggests different individuals prefer different habitats, outside of what’s expected based on their sex or body size. 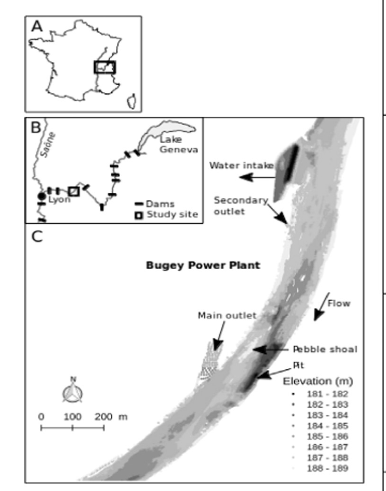 Figure 1. The study location (A) along the Rhône River (B), including the Power Plant outlet (Bugey Power Plant) and environmental characteristics (C). Taken from Capra et al. 2017.

Modeling more dynamic environmental conditions and considering individual differences is incredibly challenging. Despite this, understanding variation in habitat selection is important, especially when considering variable environments such as those that experience fast changes in discharge caused by hydropower plants (called hydropeaking), or changes in water temperature due to water discharge from industrial cooling.  Hydropeaking causes changes in the river bed, and leads to dewatering in some areas. This can cause fish to be stranded in areas that quickly dewater when flows decrease.

Hervé Capra and colleagues from the University of Liége in Belgium used telemetry to understand individual fish habitat preference in a hydropeaking river, the Rhône River, one of the largest rivers in Europe. The section of river they chose for this study was downstream of a nuclear power plant, in an area influenced by numerous hydropower plants (Figure 1). Consequently, this site experienced warming from water discharge from the nuclear plant cooling system, as well as hydropeaking from the regulated water discharge caused by the various hydropower plants. 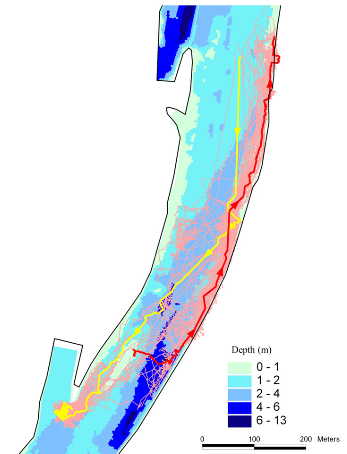 Figure 2. An example of a trajectory (pink, red, and yellow lines) from a catfish during the survey, shown on a map with water depths (blue) at intermediate discharge. The bold red and yellow lines illustrate rapid travels along frequently used routes. Image from Capra et al. 2017.

For this telemetry study, 18 fish of three different species (catfish, barbels, and chubs) had sound-emitting tags surgically implanted and were tracked for three months. Each tag emitted sound at a unique period, so individual fish could be tracked in the river (Figure 2). Sound receiving hydrophones were also in the water, and stored the date and time when sounds from the tags were received. The researchers also characterized the depth and discharge profile of the river to quantify water velocities across the site (Figure 3). This information was used to identify refuges from high water velocities that would sweep fish downstream, and to identify areas that would become dry when water discharge from the hydropower plants was reduced.

The ability to regularly and accurately locate individual fish over an extended period of time allowed the researchers to model individual fish habitat preference in response to complex changes in river discharge and temperature. Their results suggest that fish habitat selection depends on combinations of small changes in water velocity and depth, a fish’s past experience with specific habitats (e.g., if the area had dewatered previously), substrate, and water temperature. The model of fish habitat use suggests that individual fish of the same species differ in what they prefer, and that fish appear to memorize environmental changes and develop habitat preference patterns based on environmental conditions experienced previously. The researchers found that fish tend to avoid very fast-flowing habitats and tend to stay near the shore where risk of dewatering is high. 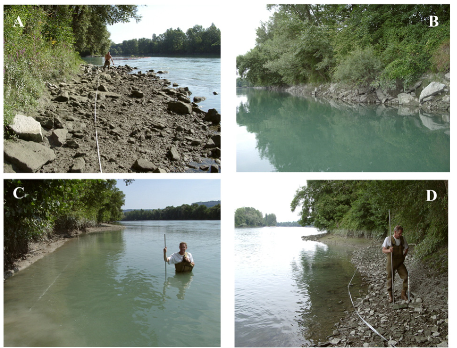 Figure 3. Photos of the banks of the Rhône River during low discharge. One of the researchers can be seen sampling along the shore. Figure from Capra et al. 2017.