Alewives (Alosa pseudoharengus) are small, silvery forage fish in the family Clupeidae (Figure 1). Their native range spans the eastern seaboard of North America from South Carolina to Newfoundland. Historically, alewives have supported important commercial fisheries, primarily for human consumption, bait, or fertilizer. However, their populations have drastically declined due to the loss of spawning habitat and overfishing. Alewives are anadromous throughout their native range, making annual spawning migrations into freshwater rivers from the Atlantic Ocean. They also exhibit natal homing, returning to the river they originated from to spawn. 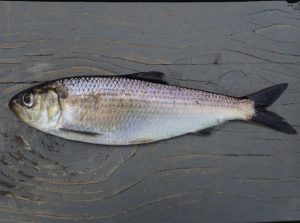 Spawning is influenced by the water temperature, and the timing of the spawning runs each spring progresses chronologically from south to north as the ocean temperature reaches 5-10ºC. This can begin as early as February in the Carolinas to June in the Canadian Maritimes. Alewives typically spawn at night in slow-moving waters including coves, oxbows, small streams, and ponds. In rivers blocked by dams or culverts, they have also been observed spawning in deep pools and eddies. After spawning, adult alewives migrate back downstream toward the ocean. Biologists have long believed that alewives complete a single spawning migration before returning to the ocean. However, alewife spawning behavior may be more complex than previously known.

Dr. Kellie McCartin from Stony Brook University led a study that examined the movements of alewives in the Carmans River on Long Island, New York. The Carmans River is a small river (~15 km; 9.3 mi) with several mill dams blocking upstream migration. A fish ladder was installed in 2008 on the lowermost dam, the Hards Lake Dam, reconnecting about 5 km (3.1 mi) of freshwater habitat to migratory species. Between the Hards Lake Dam and the next impassible dam upstream, the Lower Lake Dam, are two lowhead dams where fish passage was unknown.

During the annual spawning runs from 2012 through 2014, the researchers captured migrating alewives using either a fyke net or a backpack electrofisher. A fyke net is a type of fish trap that has wings to guide the fish into the lead funnel of the trap (Figure 2). There are several internal funnels that prevent fish from escaping. After a period of time, the fish are retrieved from a collection area at the end of the net called the ‘cod-end’. Electrofishing is a common freshwater sampling technique where an electrical current is passed through the water to temporarily stun fish so they can be caught with a dip net. 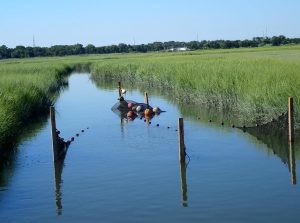 The alewives they caught were tagged with acoustic transmitters to track their movements in the river. The transmitters had a short battery life of up to 153 days. The alewives that were captured during the spawning runs in 2013 and 2014 were also implanted with a Passive Integrated Transponder (PIT) tag to track the fish long-term. The two types of tags ‘pinged’ nearby receivers in different parts of the river so the researchers could track the movements of individual fish over the course of the study.

There were two types of receivers to detect the two types of tags. An array of hydrophones (underwater microphones) were placed from the mouth of the river through the reconnected section of the river upstream of the Hards Lake Dam to detect the acoustic transmitters. Radio Frequency Identification (RFID) antennas were also placed at locations throughout the river, including in the fish ladder, to detect the movements of the PIT-tagged alewives. Both the hydrophones and the RFID antennas were deployed in the river until the study concluded in November 2015 (Figure 3). 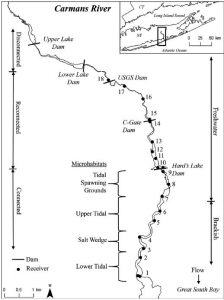 Figure 3. Map of the Carmans River on Long Island, NY. The black circles represent the locations of the hydrophone receivers. The delineations of the connectivity of the river due to presence of the dams is on the left of the map. The microhabitats of the tidal “connected” portion of the river are delineated with the brackets in the center of the map (from McCartin et al. 2019).

Contrary to the belief that alewives only migrate to their spawning grounds once during the run, researchers found that alewives have a variety of different spawning behaviors. Of the tagged alewives, 41% made multiple upstream migrations. Some of them even left the river and entered the Great South Bay estuary before migrating upstream again! A number of the PIT-tagged alewives that returned to the river in the following years also made multiple upstream migrations to the reconnected spawning grounds. This pattern indicates that oscillating, back-and-forth migrations is natural, rather than a response to being handled and tagged during the study. In addition, some of the fish that spawned below the Hards Lake Dam and never approached the fish ladder were also observed oscillating between the estuary and the tidal portion of the river. This indicates that failure to pass through the fish ladder was not the primary cause of the oscillating behavior below the dam. As the status of alewife spawning stocks are mainly determined by spawning run counts at fish ladders, this oscillating behavior may lead to an overestimation of the population as individual fish can be counted more than once.

The spawning behaviors in alewives may differ between river systems. The Carmans River is a small river compared to many others that have alewife runs, the spawning grounds are only about 4 km (2.5 mi) from Great South Bay. In larger rivers, alewives have been found to migrate hundreds of kilometers inland to spawn. Many of these rivers have been dammed relatively close to the coast, preventing long migrations upstream. These barriers can potentially cause this oscillating spawning strategy to occur. Further studies are needed to determine if this behavior is common in alewife populations in other river systems.

It was traditionally believed that alewives simply migrated upstream once to spawn before rapidly returning to the ocean. This study showed that alewife spawning runs may be more complex than we thought.