Construction, development, and change in land use are significant parts of human development. Carrying out these activities while maintaining the integrity and functionality of ecosystems is important, but can be difficult. However, computing models have advanced handling such tasks. Models can combine different variables in a spatial system to predict changes in the environment that could then be applied towards construction projects to ensure both a healthy environment and economic development.

Computer models were used in this way by Sanchez-Cabalbero and his colleagues, scientists from CICIMAR-IPN, La Paz, Mexico and ZMT, Bremen, Germany. These scientists studied a beach area in the Southern Gulf Of California, Mexico. This area has a rich reef system with a healthy community of bottom-dwelling organisms. Sanchez and colleagues measured baseline conditions of the area before the onset of urban development activities at the study site. Then they modelled how habitat complexity could be effected by development activities, to predict the potential impacts of habitat degradation for the reef. 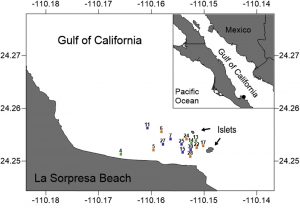 The chosen study area was a rocky reef in front of a beach (Fig.1). The development includes the construction of a tourist marina as a part of residential area. This construction has been planned for five years, with 80% of the construction work taking place near the rocky reef area. The breakwater embedment and land reclamation will be carried out for first two years. This part of the development poses the most danger to the reef environment. The construction will also include dredging – the clearing of a water bed by scraping out the substrate (e.g., mud and clay) and plants. This part of the work poses a major threat to the bottom-dwelling organisms that live on the reef, because the process will remove the aquatic plants that they use for shelter and food, as well as many of the organisms themselves. 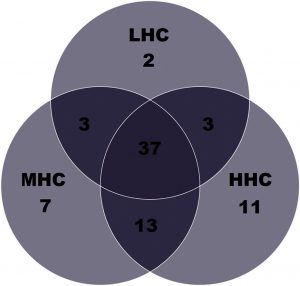 HHC transects were characterised by a stony coral community, whereas, the LHC and MHC areas were characterised by sand and macroalgae. Results from the model inferred that HHC areas are likely the most affected by construction, including dredging, sedimentation and eutrophication. This will ultimately affect the composition of benthic communities leading adverse impact on LHC and MHS area community.

The researchers suggested some mitigation measures based on these assessments to the construction manager during this project. If the construction manager gives more attention to the HHC area and follows the suggested mitigation measures, the community systems can remain less affected overall. Mathematical models and statistical tools can help us understand the ongoing problem of species extinction and depleting aquatic community structure. Habitat degradation in coral reefs is usually correlated with decreased coral habitat and their replacement by another organism. Using statistical tools and computing systems, it becomes easier to understand the habitat modification impacts on fish population within the reef community. Understanding specific habitat attributes and how they contribute to the overall health of aquatic ecosystems can allow modifications to construction plans and ensure the conservation of marine community with minimal disturbance.