Green crabs (Carcinus maenas) are a relatively small species of crab that live in intertidal zones and shallow coastal waters (Figure 1). They are native to the Atlantic coast of Europe and North Africa but have been inadvertently introduced around the world due to human activities. Green crabs are considered one of the world’s most prolific invasive species. They can tolerate a wide range of salinities and temperatures, and can survive in areas with low dissolved oxygen levels. They inhabit a variety of habitats including rocky shores, mudflats, sand bottoms, and salt marshes. Green crabs are also voracious predators, feeding on bivalves (clams, mussels and oysters), worms, periwinkles, small fish, and other crustaceans. 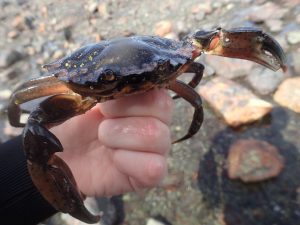 Green crabs often have negative effects on native species in areas they have invaded.  They have been found to compete with juvenile American lobsters (Homarus americanus) for food and shelter.  American lobsters are a commercially important species in the northeastern United States and the Canadian Maritimes.  After hatching from eggs, lobsters go through a free-swimming larval stage.  After molting several times, shedding their rigid exoskeleton so they can grow larger, the lobsters resemble miniature adults and settle to the bottom.  Juvenile lobsters are vulnerable to predators and shelter in small crevices or burrow in mud for refuge (Figure 2). 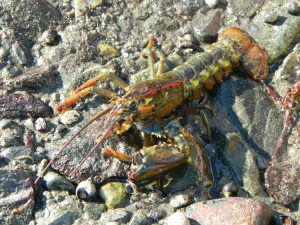 Green crabs have become extremely abundant in many estuaries along the coast but their impacts on lobster populations are not fully known. Dr. Jason Goldstein from the Wells National Estuarine Research Reserve and Dr. Win Watson, Liz Morrissey, and Erika Moretti from the University of New Hampshire investigated the distribution and species interactions between invasive green crabs and resident American lobsters in the Great Bay Estuary in southeastern New Hampshire. This large tidal estuary supports a commercial lobster fishery, and is unique as it is located about 16 km (10 mi) inland from the coast. The habitat and water quality in the estuary have changed in recent years due to increasing water temperatures and the degradation of eelgrass beds and oyster reefs. These changes may favor the hardy green crab.

From June through August in 2013 and 2014, the researchers conducted a trap study at four fixed locations in Great Bay and Little Bay to examine the distribution of green crabs and lobsters in the estuary (Figure 3). They used two types of traps: standard ventless lobster traps and juvenile collectors. The juvenile collectors were modified ventless traps with smaller openings to catch small green crabs and lobsters while keeping the larger ones out. The traps were deployed for two to five days with data loggers measuring the water temperature. 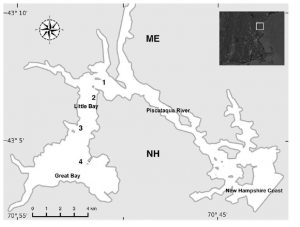 Results suggested that green crabs were found to be most abundant in the upper reaches of the estuary in Great Bay. These sites had lower salinities and warmer water temperatures than the sites in Little Bay. Green crabs are better adapted to living in warmer waters and have been found to grow faster and reach sexual maturity earlier in these conditions. Lobsters were more abundant in Little Bay, closer to the mouth of the estuary. American lobsters prefer higher salinities and will actively avoid areas of low salinity. Lobsters can also sense slight changes in temperature and will leave areas that are too warm or too cold for them.

Although there is a large population of green crabs in the Great Bay Estuary, their interactions with lobsters may be limited due to the salinity and water temperature preferences of each species. The predator-prey relationships between green crabs and lobsters may also influence their distributions in the estuary. Recent research has documented aggressive interactions between green crabs and American lobsters when crab densities are high. These exchanges may even deter lobsters from entering traps, possibly affecting catch rates in the lobster fishery (Rayner and McGaw 2019). While predation between the two species can occur, further studies are needed to understand how these species interact with each other in the wild.