Movements of large catfish in the Amazon River basin

Giant catfish (Genus Brachyplatystoma) in the Amazon River basin have a reputation for long distance migrations (up to 5800 km or 3600 miles), so hydropower dam projects present potential barriers to their life history. However, the actual consequences of dams and other barriers on catfish migrations are not completely understood because many neotropical catfish species remain generally understudied. 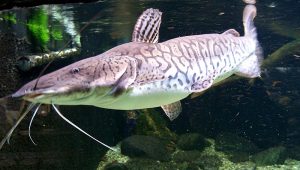 Figure 2. The Tiger Shovelnose Catfish, a catfish in the same genus as the Tiger Sorubim. Photo credit: Wikipedia 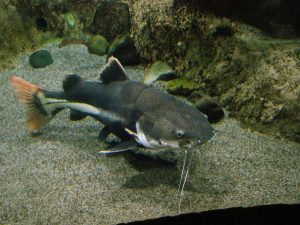 The study took place in the Xingu River, a tributary to the Amazon River (Figure 3). It is over 1900 km (~1200 miles) long and contains natural barriers such as waterfalls and a large section of rapids known as the Big Bend. Upstream of Big Bend are hydropower dams. The researchers wanted to understand the upstream and downstream movement of these two catfish species, whether they navigated through the rapids and waterfalls, and what determines the initiation and rate of these movements. 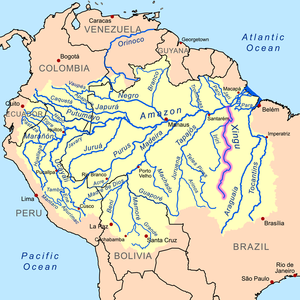 To complete these objectives, the researchers implanted 121 Redtail Catfish and 61 Tiger Sorubim with combined acoustic and radio transmitters. This form of biotelemetry allows researchers to track the movements of fish across different environmental gradients such as temperature or depth. In order to detect catfish movement, nine receivers were placed along a 500 km (~300 miles) section of the Xingu River. The study area was downstream of the dams, but contained natural barriers, including the Big Bend rapids.

The researchers found that about 50% of the catfish of both species were found near the release sites permanently after the transmitters were inserted. This could have been due to mortality, tag loss, or resident fish that simply did not move beyond the release sites. Interestingly, the migratory Redtail Catfish did not move every year of the study. This phenomenon is called partial migration and it may occur in response to water levels or malnourishment. Both species timed their upstream migrations in tandem with rising water levels at the end of the dry season, presumably to spawn. The most surprising finding was that both species were also observed moving into or upstream of Big Bend, which was previously thought to be a natural barrier for catfish. Surpassing this barrier means that catfish must also contend with hydropower dams further upstream. Now more research must be performed to understand if catfish attempt the dams’ fish ladders to continue their journeys upstream.

The results from this biotelemetry study provide a basis for management and conservation of Redtail Catfish and Tiger Sorubim in the Amazon River basin. It highlights that at least two species of catfish have both a proclivity for long migrations and the ability to navigate natural barriers. Surely, they are not alone. An increasing demand for hydropower in Brazil should also be paired with research on impacts of dams on the many economically and culturally important fisheries of the Amazon.