Importance of a marine conservation zone for blue crabs

Marine Protected Areas (MPAs) are areas where human activities are restricted for conservation or historical purposes. These restrictions can include limitations on fishing, development, and anything that disrupts aquatic life. In the United States, MPAs protect a wide variety of habitats including lakes, estuaries, intertidal zones, and offshore areas in the ocean.

The Sedge Island Marine Conservation Zone (SIMCZ) in New Jersey’s Barnegat Bay was established in 2001 to preserve and protect the ecologically sensitive expanse of salt marshes, tidal creeks, and shallow estuarine waters around the Sedge Islands north of Barnegat Inlet. It was the first Marine Protected Area in New Jersey and encompasses about 16,000 acres of estuarine habitat adjacent to Island Beach State Park. Recreational and traditional uses of the area are allowed in the conservation zone including birdwatching, kayaking, fishing, clamming, crabbing, and waterfowl hunting. Commercial fishing and the use of personal watercraft (such as jet skis and waverunners) are prohibited.

Despite being created in 2001, a thorough examination of the importance of the SIMCZ on ecologically and economically valuable species had not been conducted. In 2012, Dr. Paul Jivoff and a group of researchers from Rider University evaluated the ecological importance of the conservation zone on blue crabs (Callinectes sapidus; Figure 1). Blue crabs are one of the most economically important species in New Jersey, supporting large commercial and recreational fisheries. They are also one of the most dominant bottom-dwelling predators in Barnegat Bay and other estuaries in the Mid-Atlantic region. 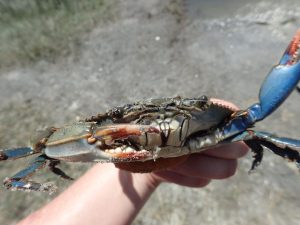 For this study, the researchers compared the blue crab populations inside the SIMCZ with populations in sites outside the conservation zone in Barnegat Bay (Figure 2). The “east-west” sites were sampling areas of varying habitats located in the SIMCZ, the middle of the bay and along the western shore. These included shallow areas with submerged aquatic vegetation (SAV), deeper open-water habitats, and creek mouths. The “north-south” sites were areas in the estuary with SAV-dominated habitats similar to those found in the SIMCZ. 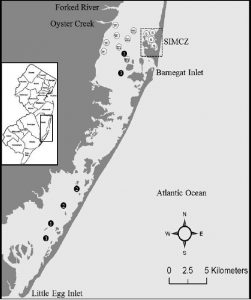 From May to August in 2012 and 2013, a trap study was conducted using commercial-style crab traps baited with Atlantic menhaden (Brevoortia tyrannus). The crabs were taken to the laboratory at the Rutgers University Marine Field Station where the research team determined the sex, age, molt stage and sexual maturity of the crabs. The carapace width (Figure 3) of each crab was measured, and the ovigerous stage of adult females (when they are bearing eggs) was also assessed. 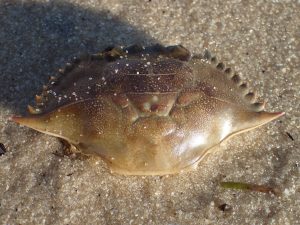 Figure 3. The carapace of a blue crab found along the shores of the Barnegat Bay. Carapace width is the measurement between the tips of the crab’s two sharp lateral spines or “from point to point”. Photo by Steve Luell.

The results suggest that the limited fishing pressure positively influenced the sizes of male blue crabs in the SIMCZ. Large males (greater than 115 mm) were most abundant in the conservation zone compared to SAV-dominated areas outside of the zone where they experience greater fishing pressure throughout the year. Ovigerous female crabs were very abundant in the SIMCZ during May of both years. This was likely due to the proximity of the SIMCZ to the spawning grounds near Barnegat Inlet. Ovigerous females were also caught in high numbers in May along the western shore of the bay. The Oyster Creek Nuclear Generating Station used water from Barnegat Bay to cool the reactor until it was taken offline for the final time in 2018. The warm water discharged into the bay may have stimulated egg development at a time of year when the water temperatures in the rest of the estuary remained relatively cool.

MPAs that preserve spawning aggregation sites and juvenile nursery areas are valuable to the species they protect. The SIMCZ is relatively small and only protects about 2% of the total area of the Barnegat Bay estuary. Despite its relatively small size, large numbers of ovigerous females congregated in the conservation zone. Further work is needed to understand the effects of the SIMCZ on the entire blue crab population in Barnegat Bay.