Freshwater fishes are becoming increasingly vulnerable to human activities. Of the many threats they face (climate change, pollution, invasive species, over-fishing, etc.), habitat loss is thought to be one of the most significant factors in fish biodiversity loss and extinction. Understanding how fish respond to habitat loss is an important step in protecting those species that are most vulnerable. Scientists are currently studying different attributes that are thought to impact how fish respond to habitat loss. Adam S. van der Lee and Martin A. Koops, scientists working for Fisheries and Oceans Canada in the Great Lakes Laboratory for Fisheries and Aquatic Sciences, have used fish population models to predict how body size influences the ability of a fish to cope with habitat loss. van der Lee and Koops used estimates of fish growth, survival, and reproductive success to predict fish population sizes at different life stages. A simplified life cycle consisting of 3 stages (1 – eggs to age one; 2 – age 1 to age of maturity; and 3 – adults) was used. They were able to forecast how loss of fish habitat might affect the productivity (the number of surviving offspring per reproducing female) and growth of fish populations based on body length at each life stage. 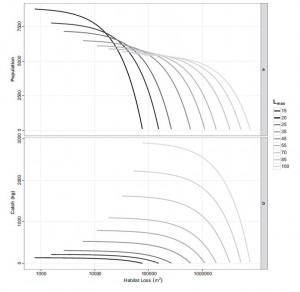 van der Lee and Koops used fish body lengths ranging from15 to 100 cm to model how fish body size might impact the ability to withstand the effects of habitat loss. Their model suggested that small fishes are more likely to show population declines as habitat loss increases compared to large fishes. However, catch rates were much lower for larger fishes at high levels of habitat loss. Reproduced from van der Lee and Koops (2015).

This work brings to light important considerations for future fisheries management and monitoring. Since large fishes are more likely to exhibit declining catch rates, at first glance it may seem as though large fishes are more susceptible to habitat loss. However, large fishes may actually be more resilient than small fishes to population declines and lowered reproductive success associated with habitat loss. Catch rates of small fishes on the other hand, are more likely to remain stable even as their habitat, and consequently population size and reproductive success, declines. The take home message: when designing monitoring programs for species at risk, if habitat loss is of concern, it might be prudent to assess small fishes first, even when catch rates would tell us to do the opposite.