Arctic Cod’s Coldwater Circuit: how far they travel and their importance in the Arctic food web

In the Arctic Ocean, sea ice melt is the crux of the food web. As the sea ice begins to melt every spring, sunlight is able to hit the water. Sunlight provides energy for microscopic algae to grow. Algae are eaten by zooplankton, which in turn are eaten by fish, birds and whales. The Arctic cod (Boreogadus saida) is a small fish that plays a crucial role in this sea ice food web. Arctic cod are referred to as forage fish, a type of fish that eat zooplankton. These cod are a main food source for whales, seals, and birds. Biologists think of cod as a gateway between upper and lower trophic levels because this fish transfers energy between the different positions in the food chain. 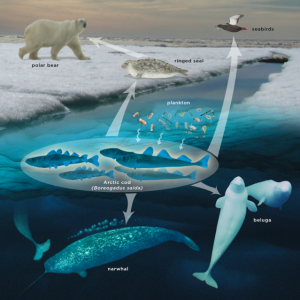 We know very little about Arctic cod because it is so difficult to conduct research in the high latitudes of the Arctic. This is because these environments are hard to access, the weather is often a challenge for both scientists and their equipment, and sea ice cover makes it difficult to access the water underneath. In particular, we know very little about where cod go while they’re in the Arctic. Now more than ever we need to understand cod’s movement because the amount of ice is decreasing in the Arctic, primarily due to anthropogenic pressure, and we need to know if this is impacting them in any way because they play such a crucial role in the Arctic food web. As well, the anthropogenic pressures are changing because reduced sea ice allows greater access to cod habitat.

Arctic Cod, a small, ice-affiliated forage fish, is the most abundant marine fish and is an important link in marine food webs. Photo by Catherine Meckleburg, 2007.

We’ve long assumed that Arctic cod must be moving horizontally in the Arctic, but have few guesses regarding how far cod travel. A recent study by Kessel and his colleagues took advantage of an acoustic array infrastructure that is available via the Ocean Tracking Network (OTN) to make the first documentation of large-scale horizontal movements of Arctic cod. Researchers placed acoustic transmitters into 85 individuals in Resolute Bay, Nunavut, Canada. They found that Arctic cod were indeed making large-scale horizontal movements. Researchers found five of their tagged cod 192 km due east from their original location in Maxwell Bay. This information helps us understand at what scale energy is transferred in the Arctic food web and how these fish can be influencing the distribution of their predators, such as seals and whales. 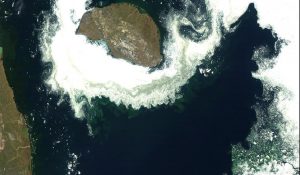 A bloom of algae near Wrangel Island in the Arctic Ocean. The ocean’s levels of algae have rapidly increased. Credit: M. Kahru

What happens to Arctic cod if sea ice continues to decline? Reductions in sea ice along with changes in the timing of melting as the climate warms would lead to a change in the timing of ice algae blooms. If the sea ice is so thin that sunlight can reach the algae, or the ice is gone months earlier because of the warmer weather, algae blooms may occur and crash before larval fish that depend on this food source hatch. There would be little to no overlap between fish larvae and their food sources, resulting in a decrease in each organism in the Arctic food web that predates on Arctic cod. Understanding how many cod there are, where they go, and how this will be changed under a warming climate is important for cod management and the future of Arctic policy-making.

This animation tracks the relative amount of ice of different ages from 1990 through early November 2016. Seasonal ice is darkest blue. Ice that is 9 or more years old is white. More explanation and still image comparisons are available @ http://bit.ly/2016ArcticReportCard