Remove the dam, restore the river 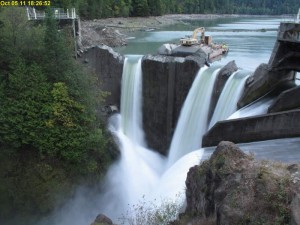 The Glines Canyon dam on the Elwha River was removed in 2014. Photo credit: National Park Service

Our need for water to power our homes, irrigate our fields, and control flooding has resulted in the obstruction of rivers through the construction of dams. We are aware of the pressures this creates for the ecosystem; dam construction is primarily responsible for alterations in sediment transport and water flow, which in turn affects nutrient availability and the soil, plant, and animal communities. To restore the river and renew ecosystem functions, many have decided to remove dams. Within the USA, close to 1300 dams have been removed to date, but the largest removal took place on the Elwha River in Washington, USA.

The scale of this project allowed for an unprecedented real-world experiment. A large body of knowledge is being accumulated through baseline and ongoing monitoring. When considering the quality and quantity of in-stream fish habitat, much begins with the sediment – in this case about 21 million cubic meters, or the volume of stone used to build the Great Pyramid of Giza. Dr. Amy East and her colleagues recently published a paper, “Large-scale dam removal on the Elwha River, Washington, USA: River channel and floodplain geomorphic change” which describes how this material changed the shape of the river, and habitat response following dam removal.

The mission of the Elwha project was to remove the Elwha and Glines Canyon dams in order to, “restore habitat for anadromous fish species.” The dams were built in 1913 and 1927, respectively, without fish passage structures. Dam construction therefore reduced accessible salmonid habitat in the Elwha River by 90%. The dams were removed in stages spanning over three years, with the Glines Canyon Dam being completely removed by 2014. The researchers monitored the changes in the ecosystem during the removal, and are now observing the new state of the river.

Coarse substrates such as cobble and gravel are becoming more available as fine sediments from the dam are pushed downriver. Coarse substrates are important for successful salmonid reproduction.

The first year of removal brought about an influx of fine sediments which filled in the interstitial spaces between the cobble sediment downstream of the dams. The authors suggest that this likely had an impact on the macroinvertebrate community which live in such spaces. They also suggest that the fine sediment also would have decreased flow of oxygenated water through the riverbed, potentially harming nearby fish eggs. However, these negative consequences were temporary, and larger changes were coming.

In the second year, approximately 1.2 million t of sediment accumulated in the reaches of the river downstream of both dams, filling in pools and raising the riverbed by about 1 m. However, this accumulation only represented 10% of the sediment which was moved! The rest made its way out of the river mouth and expanded the delta along the coast, which today expands seaward an additional 400 m. Within the river itself, the channel structure changed from a riffle-pool to a braided morphology.

By 2013, the finer sediments had been transported downstream, leaving the substrate as mostly pebble size. This is an improvement over both sediment-starved larger cobbles armoring the channel, and the fine sediments which moved through the area during the removals. The braiding channel morphology has also created more complex habitats for fish and other aquatic organisms to inhabit. The improved river condition should prove to be advantageous for the salmonids, which are beginning to use these habitats once again for spawning.

As the Elwha River finds its new equilibrium state in the following years, more research will be conducted and dam operators around the world to inform efforts to help their respective ecosystems.