Protecting native brook trout by isolating them from brown trout

In many coldwater streams in North America, nonnative trout are replacing native trout populations through hybridization, competition, and predation. Brook trout (Salvelinus fontinalis; Figure 1) are a species native to eastern North America. Throughout their native range, brook trout populations have experienced severe declines due to overfishing, habitat degradation, acid rain, climate change, and the introduction of nonnative species. Brown trout (Salmo trutta; Figure 2) are native to Europe but have been stocked in North America and worldwide due to their popularity with anglers. They are prized by fly fishermen for their large size and elusiveness. Compared to brook trout, brown trout are highly territorial, grow much larger, and can tolerate warmer water temperatures. 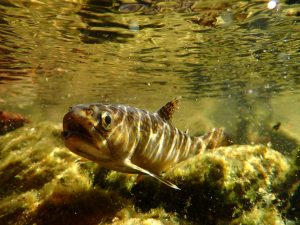 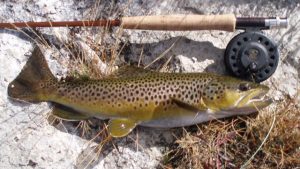 There are several conservation strategies for protecting native trout populations. One of the most popular strategies is isolation management. With this method, barriers are placed in areas where they limit dispersal to prevent nonnative trout from spreading upstream. This strategy has been used in the western United States to conserve populations of cutthroat trout (Oncorhynchus clarkii) that have been relegated to headwater streams by competing nonnative trout. Similarly, brown trout have invaded the downstream reaches in many watersheds in the eastern United States relegating brook trout to small, headwater streams.

Mark Kirk, Anna Rosswog, Kirsten Ressel and Dr. Scott Wissinger from Allegheny College evaluated the potential of isolation management for brook trout populations in the upper Allegheny River basin in northwestern Pennsylvania. Between 2006 and 2016, Dr. Wissinger’s lab surveyed the populations of brook and brown trout at 78 locations throughout the river basin as a part of a larger fish community study in the region (Figure 3). These data suggested that there were possible barriers separating brown trout from brook trout populations in headwater streams. Examples of barriers found include man-made dams, wetlands, and impoundments created by beaver activity. These barriers served as an experiment to understand what might happen if barriers were purposefully introduced. 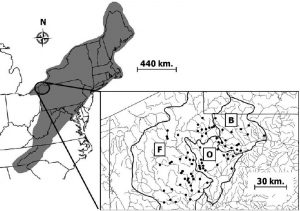 Figure 3. Map of the study area in the upper Allegheny River basin in northwestern Pennsylvania. The shaded area is the native range of brook trout in the northeastern United States. The dots represent the 78 study sites in the French Creek (F), Oil Creek (O) and Brokenstraw Creek (B) basins (from Kirk et al. 2018).

From May through October 2016, 34 of the sites were specifically sampled using a backpack electrofisher to compare the trout species present in the streams containing barriers that may prevent brown trout from spreading upstream and those present in the streams without barriers. The researchers chose the sites within areas where brown trout are stocked but brook trout are not. They classified sites where they caught naturally reproducing brook trout as “brook trout sites” and sites where one or more brown trout were caught were classified as “brown trout sites”.

Though there are benefits to isolating brook trout populations from invading brown trout, there are also risks. Small, isolated populations can be in danger of extirpation (extinction in a specific area though the species exists elsewhere) due to localized disasters such as floods, forest fires, droughts or deep freezes. Barriers also prevent the populations from interacting with each other and can lead to a loss of genetic diversity through inbreeding.

When faced with these circumstances, fisheries managers should examine the trade-offs between purposefully isolating the native population and the invasion threat from the nonnative species. If isolation is the best strategy, the streams containing the native trout species should be protected from habitat degradation and landscape alterations that may raise water temperatures. To prevent further fragmentation, constructed barriers should be positioned to permit seasonal movements between the isolated populations to help avoid the loss of genetic diversity. Native trout populations that are too isolated from others may require genetic rescues (introducing genes from one population to another to increase genetic diversity).

There are three specific scenarios where this strategy would be best implemented for conserving native brook trout: in low gradient streams, larger headwater streams, and streams along the edge of the brook trout’s distribution where they have already experienced population declines. The results of this study show that isolation management may be a viable strategy to protect brook trout populations in small, headwater streams when the threat of being displaced by nonnative brown trout is high.