A boulder to lean on: Habitat complexity shapes the behaviour of juvenile salmon 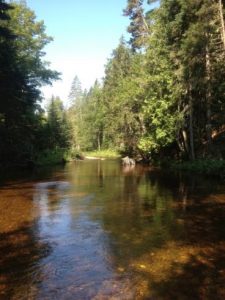 Territorial animals stake claim to a given area and aggressively defend it against intruders. However, as habitat homogeneity decreases and complexity increases this becomes increasingly difficult, and animals may only be able to defend small territories. While smaller territories allow for higher densities of animals to live in an area, this may also result in slower growth rates as smaller territories are typically associated with decreased access to food. Alternatively, habitat complexity could provide more spaces to hide, which generally decreases the threat of predation and reduces levels of aggression— both of which decrease energy consumption. Given the potential costs and benefits of a complex habitat, it is unclear how manipulating habitat complexity actually affects animals at the individual level. Using Atlantic salmon, Caroline Bilhete and James Grant of Concordia University set out to tackle this very question (Bilhete & Grant, 2016).

Researchers caught young-of-the-year Atlantic salmon (YOY; less than one year old) from Catamaran Brook, New Brunswick, and placed them into large mesh enclosures within the stream for seven days. These enclosures contained either a simple environment consisting of only natural stream substrate, or a complex environment in which boulders were added. Mesh size was large enough to allow invertebrate prey items to enter, but small enough to prevent fish from escaping. Over the seven days they monitored rates of feeding, rates of aggression, growth, and territory size of individual fish. They found that fish in the complex environment displayed lower feeding rates, lower levels of aggression, and defended smaller territories than fish in the simple environment. Growth rates, however, were similar across both environments.

Artificially increasing habitat complexity has widespread effects on the behaviour of juvenile salmon. Individuals were unable to defend as large of territories as those defended by fish in a simple environment, exhibiting a 30% reduction in territory size. Territories are often defended to monopolize access to food, which explains the reduction in feeding exhibited by fish in the complex habitat. However, the reduction in territory size were associated with decreased levels of aggression as well. That growth rates did not differ between treatments potentially suggests offsetting effects of these negative (reduced territory size and decreased feeding) and positive (reduced aggression) factors on overall energy consumption. Alternatively, the authors believe that the animals may simply feel safer in the more complex environment, resulting in a lower metabolic rate, which may compensate for the reduced foraging rate.

Ecosystems rely on the animals within them to keep them operational. With ecosystems becoming increasingly degraded, one of the most promising ways to combat these effects is by manipulating habitat complexity. However, the work of Bilhete & Grant highlights the importance of monitoring the effects of these manipulations on individuals within each species, and not merely the overarching effects on biodiversity.