Impacts of Wastewater Treatment Plant on Fish Abundance and Richness

Wastewater treatment plants (WWTPs) are the first point interface between urban populations and surface water bodies. If the WWTP discharge is not treated fully  adverse effects in aquatic environments by altering stream hydrology, greater discharge volume and poor water quality. This may cause decreased stream biotic integrity, homogenisation of stream communities and limited stress tolerant invertebrate species. Together with WWTP the absence of a natural riparian belt along urban streams allows higher pollutant input into the stream, this can impact biota living several miles away from the source. Although to improve such negative impacts, various efforts have been taken by environmental protection agencies and Non-government Organisations (NGOs). Despite these efforts, this may require several years for these bodies of water to return back to its pristine condition. Degraded urban streams usually supports lower aquatic biota population, in such scenarios, riparian restoration may provide important terrestrial invertebrate subsidies and have positive impacts on stream communities. 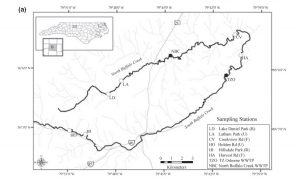 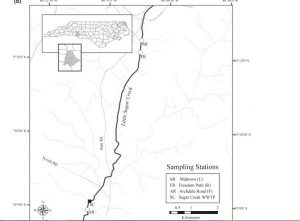 An assessment of urban streams was conducted by Dr. Northington and Dr. Hershey at Piedmon, NC, USA within urban streams. They assessed three site types i.e. Urban restored, urban unrestored and forested site (downstream of urbanisation and impacted by WWTP) (Fig.1 a anb b).In all three sites, they assessed fish community characteristic, resource availability and resource use by sampling, stream basal resources, aquatic macroinvertebrates, terrestrial macroinvertebrates, and fish population density. The highest abundance of fish population and richness was found at the restored urban site compared to two other sites. Carbon and nitrogen levels were higher at the forested site due to WWTP effluent. At the same site fish communities consisted largely of insectivores, with few omnivorous or piscivorous species.

The researchers concluded that poor water quality at the forested site affected the fish population negatively compared to the restored site and urban site. This isotope biplots analysis suggested that fish were relying more on terrestrial invertebrates for its C source at urban sites compared to forested site, because terrestrial invertebrates were depleted at forested site. This suggests that exposure to wastewater effluent can negatively impact species richness and abundance in an ecosystem. Increasing pollution is impacting aquatic systems, including fish communities. Some of these impacts are known, while others are still being explored.  This can dominantly affect the fish community richness and abundance in the system. The high nitrogen and carbon suggests the high nutrient load in the downstream site, which leads to the poor water quality by destabilising their pH, DO and other important parameters. Therefore, to maintain fish habitat and diversity, it is important to treat the municipal waste well before releasing into the surface waters.