Native fish communities of large rivers are on declining due to increasing human interference and natural forces (eg. flood). The science of fish habitat restoration is began with a relatively limited cross section of ecosystem (flood-pulse Rivers) and fish species (salmonids), which is still developing with time. Several development and new project boost economy of an area, however, in long term they damage fish habitat in some way, which becomes hard to overcome. Recently, Dr. Darryl Hondorp and his co-authors proposed a conceptual framework to tackle these questions. 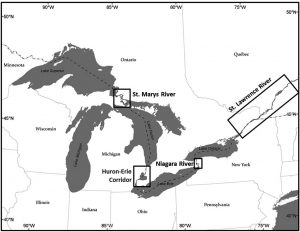 Hondorp and his co-authors used two large rivers (the St. Marys River and the st. Clair River (and Lake St. Clair)) (Fig 1) that connect several lakes in the Laurentian Great Lakes system. These rivers are referred to as Great Lakes Connecting Channels (GLCCs). The authors examined a group of native fish species that historically spawned in these large rivers; lake whitefish (Coregonus clupeaformis), cisco (Coregonus artedi), lake sturgeon (Acipenser fulvescens), and walleye (Sander vitreus). The lifecycle of all of these fishes includes the migration of adults from feeding and overwintering grounds in lakes to spawning sites in large rivers. After incubation and hatching, larvae of all species rift downstream and their survival depends upon the successful landing in a suitable nursery habitats and avoiding predators. 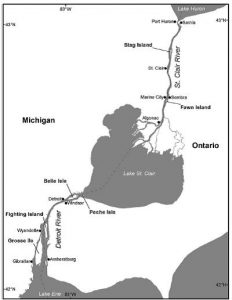 Due to overfishing, modification of the GLCC shorelines for housing and industries, use of connecting channels for discharge of industrial and municipal waste and exotic species intervention, several of these species were diminished in all the lakes by the 1900s, with lake sturgeon suffering the most severe. The GLCCs were one of the most important breeding grounds for these species. In particular, the Huron Erie Corridor (HEC), which comprises of the St. Clair River, Lake St. Clair, and the Detroit River (Fig. 2. The HEC saw reductions in fish species diversity due to habitat loss and degradation since the Livingston shipping channel construction project. Limestone bedrock was removed during this project development, which served as an ideal spawning ground for lake whitefish. This resulted in restriction of consumption and declined in fish and wildlife population and habitat. To improve the spawning ground condition, lake managers developed an artificial reef, composed of large diameter rock and cobble in areas of high current velocity. With this development, a successful egg deposition has been documented for lake sturgeon, walleye, lake whitefish and other native fish species on the Fighting Island reef complex.

To develop the restoration processes, it is required to develop a better understanding of ecological formation and processes historically created. A maintained, functional and interconnected spawning and nursery habitat understanding is also essential. Hondorp and his co-authors summarised the HEC suitability as a breeding ground for native migratory fishes with two basic factors. First, the HEC; is from glacial origin, is a clean source of water, and has a relatively stable flow regime. This makes the HEC an ideal ground for egg deposition and incubation. Second is the optimal transport conditions developed in the fluvial section of the HEC due to its stable flow regime.

Hondorp and his coauthros encourage the use of a conceptual framework for fish habitat restoration research that can provide information and tools for the policy makers. They point out that it is important to: 1) describe the levels of identification, classification and prioritisation of habitats and populations for restoration, 2) design and implement habitat rehabilitation strategies, 3) project  the results of various remediation scenarios, and 4) identify and examine critical assumptions and evaluate uncertainties. The researchers also suggest that the collaborative effort towards a conceptual framework should led by regional scientists, resource managers, and policy-makers, but with input from local municipalities, industry representatives, first nations, anglers, and other stakeholders. There is a need of proper management plan with conceptual framework towards the habitat restoration research in HEC. This needs to be reproducible, which can further implemented towards the fish habitat restoration in other connecting channels.