Where does fish habitat restoration fit in plans to revitalize the Los Angeles River? 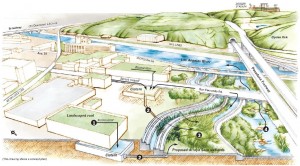 The Los Angeles River Revitalization Master Plan is an ambitious project, seeking to balance flood protection with ecological, economic, and community development interests along 32 river miles. Passing between the Los Angeles National Forest headwaters to the once-estuary at the port of Long Beach, the highly channelized Los Angeles River gives rise to a million different dreams for those seeking visions of the future along its grey banks. An abandoned industrial lot East of downtown might elicit images of lucrative water-front real estate to one stakeholder, while another imagines lush riparian corridor provisioning long-suppressed ecosystem services. How these, and other, sometimes divergent interests are incorporated into revitalization plans will set future course for the river and for the 18 million Los Angelinos it serves. Swimming somewhere below the surface of all the attention focused on this fragmented and cement-bound, yet hope-bearing soul of the city, are fish – numbering in the thousands. 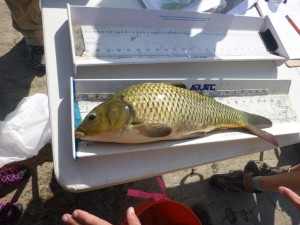 Like most urbanized rivers, the Los Angeles is currently home to a diverse suite of non-native and exotic fish such as Asian Carp, Tilapia, Mosquito Fish, and schools of Largemouth Bass. These fish are the backbone of the river’s urban angling scene, which can be spied casting its net from concrete banks wherever entry (and flowing water) is permitted, on LA River fishing blogs, and the occasional YouTube video. Historically, the river would have drawn in anglers with native runs of  Steelhead Trout. Today, aquatic habitat is severely degraded throughout the river by a number of impediments and trout are absent from the mainstem. Water quality and quantity, erratic flows, habitat fragmentation and large dams, high water temperatures, and other issues create environmental conditions that favor more tolerant non-native fish, which can out-compete native species. Despite these issues, native trout are still reported in the headwaters, but are barred from migrating to the sea by a series of dams and other barriers. Hopeful of one day overcoming these issues, group members of LA River Flyfishing uphold the motto ‘Fishing for Carp ~ Waiting for Steelhead.‘

For the restoration of Steelhead Trout populations, the plan also describes the necessity of clearing a path to facilitate migration from ocean to headwaters, equipped with places to rest and spawn. Such a future would require the removal of significant portions of concrete channel, the creation of pool, riffle, and run habitat, as well as healthy riparian cover for shade and temperature moderation, and the restoration of more natural flow regime. Successful implementation would also require collaboration with a patchwork of cities downstream of Los Angeles including South Gate, Compton, and Long Beach.

In addition to Steelhead Trout, Pacific Lamprey, Three-Spined Stickleback, Santa Ana Sucker, Santa Ana Speckled Dace, and Arroyo Chub are all species known to have historically inhabited freshwater reaches of the river. Most of these species currently receive state or federal protections due to small and struggling populations throughout their native ranges. As the Los Angeles River is one of the largest freshwater systems in the region, restoration actions to support these species could make a significant impact on efforts to recover native fish populations, and regional aquatic biodiversity. Recently, fish recovery has gained increased focus in urban river restoration such as helping sturgeon return to the Detroit River, and efforts to support walleye fishery on the Milwaukee. 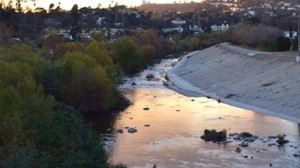 The fact that the Los Angeles River Revitalization Master Plan establishes the restoration of functional riparian ecosystem as its singular long-term goal is in the best interest of native fish, and other wildlife of the Los Angeles Basin. How this vision for ecological restoration will be implemented in specific project designs and on the ground is yet to be seen. What is certain is that improved water quality, enhanced riparian corridor, and restored in-stream habitat achieved in the name of recovering aquatic fauna will be beneficial to Los Angeles communities, who could gain improved water and air quality, and expanded opportunities to enjoy nature.