Overfishing threatens many fisheries world-wide. Conservation strategies and regulations put in place to protect fisheries rely heavily upon estimates of the abundance and distribution of fish. Fisheries managers have traditionally used seine nets, fyke nets, gill nets, trawls and electrofishing equipment to assess fish populations. These methods are very difficult, if not impossible, in complex habitats such as those with dense aquatic vegetation. In order to overcome these obstacles, Kyle Wilson, Michael Allen and Robert Ahrens from the University of Florida and Michael Netherland from the US Army Engineer Research and Development Center, have developed a method of assessing fish abundance using underwater video cameras. This innovative method of assessing fish populations, unlike traditional methods, is inexpensive and non-lethal.

The effectiveness of underwater video in estimating fish abundance was tested in ponds that contained dense mats of Hydrilla verticillata, an invasive aquatic plant common to the South-Eastern United States. The ponds contained populations of Bluegill, Redear Sunfish and/or Largemouth Bass. To lessen the impact of the underwater video on fish behaviour a flat bottom boat, maneuvered only with paddles, was used to position the underwater video camera. The camera was lowered below the vegetation to a depth of 1-1.5 meters. 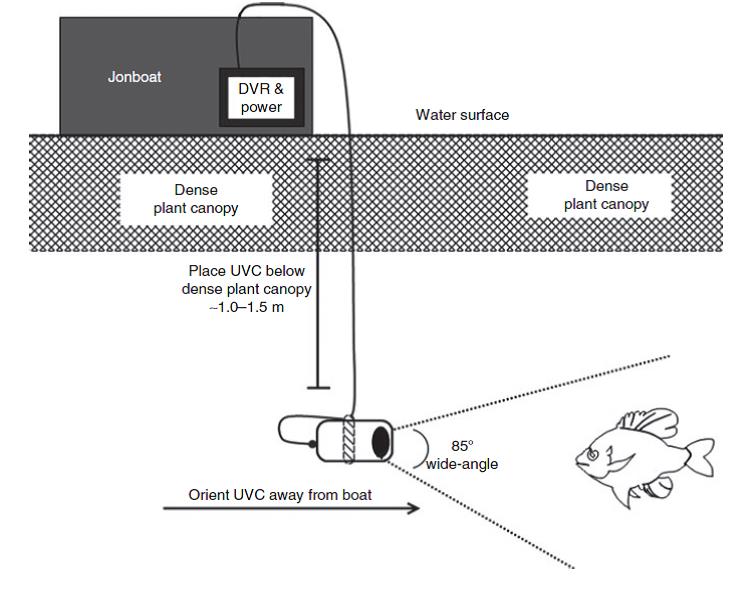 In order to obtain fish abundance estimates researchers made use of 10-20 point counts at random locations every two to four weeks. Point counts involve recording the number of species present at a given location for a set period of time. In this case, for each point count 10 minutes of video was recorded. Video playback then allowed individual fish to be identified and counted for each point count.  In order to avoid counting the same fish multiple times the statistic MaxNspecies was used. MaxNspecies represents the highest number of individual fish of each species visible in the video at the same time. MaxN was recorded for each species and each point count. While fish length was not measured researchers were able to distinguish between juvenile and adult individuals based upon morphology (girth, color, length-height ratios, etc.) However, the lead author, Kyle Wilson, pointed out that length can be measured with this method “You can estimate length for some fishes if you add a second camera at a fixed angle from the first and use simple trigonometry to determine size from two fixed points. Also, one could use fish allometry or body shape to determine size, if you make assumptions about how constant the allometric shape parameters are across individuals”. 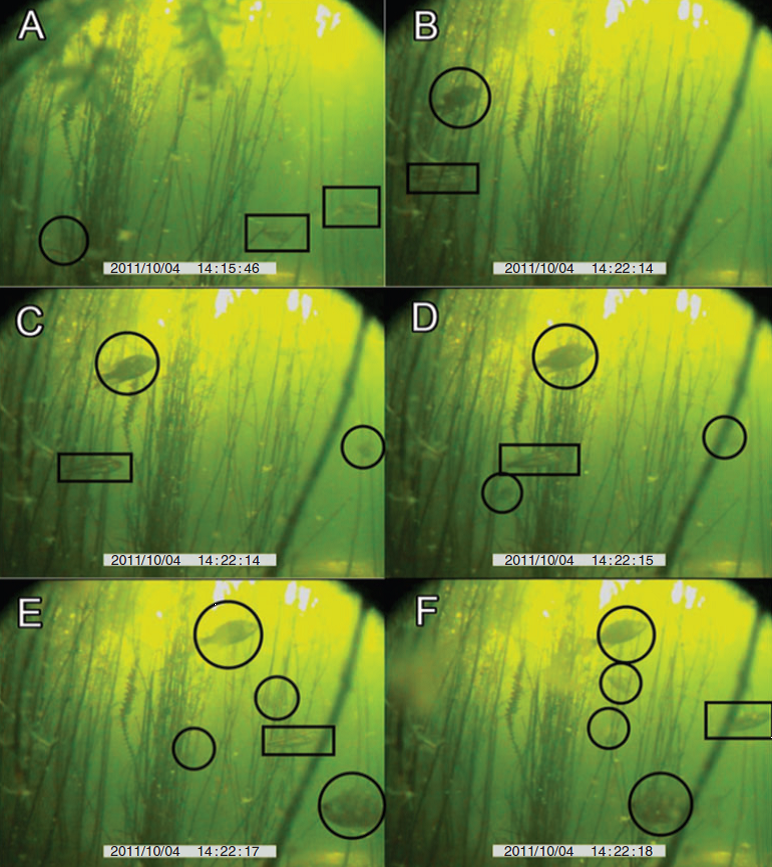 Video camera images from a sample point count. Largemouth Bass are indicated with rectangles while sunfishes (Bluegill and Redear Sunfish) are indicated with circles. The maximum number of Largemouth Bass and sunfishes observed on screen at the same time were recorded as MaxN. For example, the maximum number of Largemouth bass observed at any point in the video was two, giving an MaxN of two as shown in panel A. Reproduced from Wilson et al. (2015).

At the end of the study, researchers drained ponds and counted all fish to ascertain the true abundance of each species. The number of fish observed during point counts increased over the course of the study as did the true abundance of fish indicating that this is a reliable index for estimating changes in fish abundance, but perhaps not for absolute abundance. Underwater video cameras not only provide an effective method of estimating fish abundance in habitats that would otherwise be difficult to sample, they may also have use in monitoring food web interactions, observing fish behaviour and habitat use. Wilson noted that since publishing, his research has attracted a lot of attention, “Since we started the project, I have had a lot of e-mails and contacts from people all over the world asking for tips and help on developing similar approaches for using cameras to study fish and invertebrates in submersed vegetation. Many K-12 teachers have e-mailed me as well to ask for some details as the article is also a bit fun because there are fish on video. So there is a certain charisma of the research to provide teachable lessons to younger students it seems,” said Wilson.  While this method hasn’t quite caught on yet with monitoring agencies, Wilson believes it will have utility in sampling aquatic habitats with invasive plants. 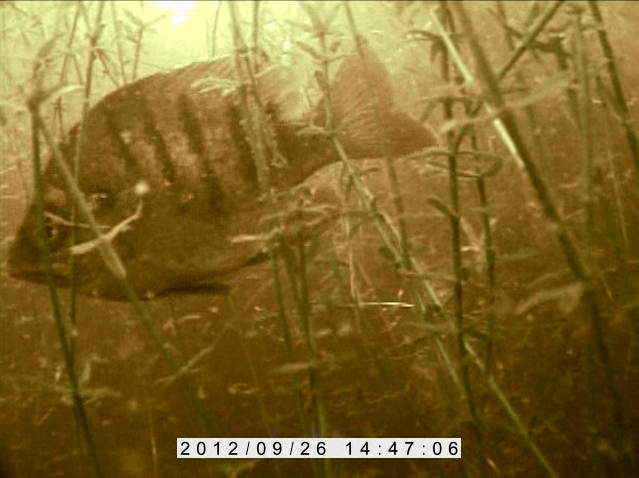