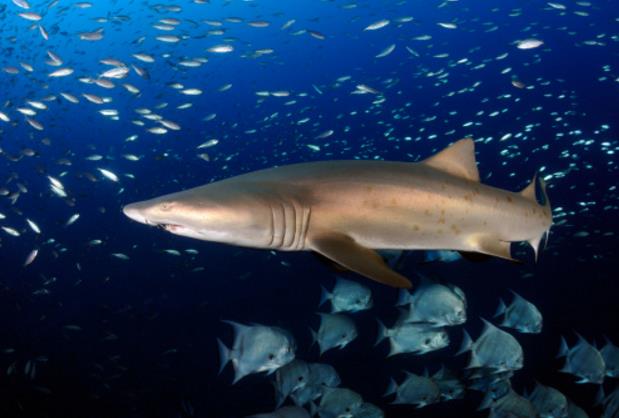 Great South Bay extends for 45 miles along the southern coast of Long Island, New York, and provides extensive lagoon habitat to Atlantic Ocean fish. Fed by freshwaters and protected from ocean predators, lagoons are known to be good places for young fish to feed and grow. Just ask the sand tiger shark!  Announced in a recent press release from the Wildlife Conservation Society’s (WCS) New York Aquarium, scientists have discovered a sand tiger shark nursery in the Great South Bay.

Sand tiger sharks live in temperate and sub-tropical coastal waters around the world, including the eastern coastline and gulf waters of the United States.  Sand tiger pups born in winter along the US southeastern coast are known to migrate north to New York and nearby states in the spring and summer and return south in the fall. Researchers from WCS’s Seascape Program in New York studied the local sand tiger population using acoustic tags to collect data and track migration and behavior patterns over the course of four years. They found that many of the sharks displayed strong ‘site fidelity,’ returning to the same location in the Great South Bay year after year, which lead to the discovery of the nursery. Researchers with the Seascape Program have also tagged blue sharks and shortfin mako sharks with the goal of learning more about migration in these species as well. 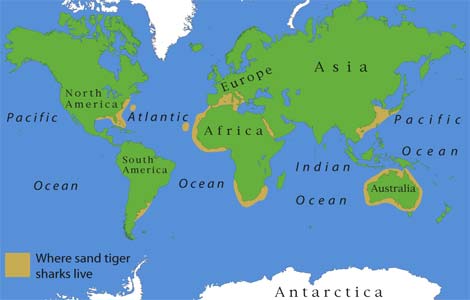 The discovery of nursery habitat in the Great South Bay will be crucial to guiding future shark conservation efforts.  In the United States, sand tiger sharks are listed by the National Marine Fisheries Service as a ‘species of special concern.’  Globally, the species is listed as ‘vulnerable’ on the International Union for Conservation of Nature red list of threatened species. While fishing for this species has been prohibited in the US since 1997, illegal fishing and commercial by-catch have likely contributed to declines in sand tiger shark populations. The slow reproduction rate of this species is another critical factor; the sand shark gestation period lasts at least nine months and females only give birth to one or two pups every other year. Fishing pressure combined with low birth rates makes sand tiger sharks especially sensitive to population decline.

Feeding on sea snails, crustaceans, mollusks, and other small fish, sand tiger sharks prefer sticking close the shore and can live up to seven years. Growing up to 10 feet in length and displaying rows of ragged, razor-sharp teeth, sand sharks might appear menacing but they are generally considered a docile species and non-aggressive to humans. These sharks are top predators throughout their range and are important to maintaining ecological balance along US Atlantic shores.

Besides the Great South Bay, only a few other sand tiger shark nurseries have been identified in the US. The recovery of this species along the eastern coast will depend upon the protection and conservation of critical nursery habitats like Great South Bay and other coastal lagoons.