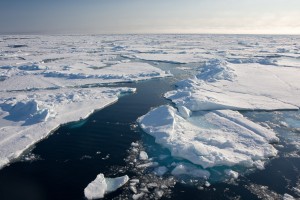 Imagine that you’re a fish living in the Arctic Ocean, below sea ice that shades you from light and makes it difficult to see your prey. If that ice were to melt, it should make it much easier for you to see and catch your prey, right? This is the proposition put forward by Øystein Varpe and colleagues in their recent publication, “A fish-eye view on the new Arctic lightscape”.

As climate change warms the waters of the Arctic Ocean and the air above it, sea ice coverage and thickness has decreased. Scientists modeling climate change expect that these decreases will become more severe in the future. This thinner and scarcer ice means that more sunlight will provide more illumination in the water column. As a result, scientists have predicted that phytoplankton in the water column will be exposed to more light and increase their productivity through photosynthesis. However, the effects of increased light on fishes’ ability to find and consume prey has not been well-studied. 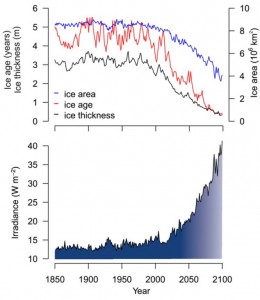 Varpe and colleagues predict decreases in sea ice area, age, and thickness (top) will result in substantial increases to the amount of illumination in the water column (bottom; Varpe et al. 2015).

Varpe and colleagues used predictions of sea ice condition to model increases in the amount of light reaching the water column into the future. They estimated that “light intensity in the water will increase dramatically”. As a result, they predict that fish living in areas with ice will be more effective predators. Additionally, they argue that fishes from sub-Arctic regions may shift their ranges toward the poles in order to take advantage of newly available food resources. Microscopic zooplankton, which are a common prey item, will experience more predation, and this food resource is likely to fuel increased fish production.  Increased zooplankton predation would disproportionately affect larger individuals that are more easily seen, resulting in evolutionary shifts toward smaller-bodied zooplankton. Varpe and colleagues point out that while their study focused on the Arctic, lake ecosystems may experience similar changes based upon decreased ice cover throughout the year.

In this paper, Varpe and colleagues raise concerns about a poorly-understood aspect of climate change impacts. They recommend that scientists conduct future research on the other potentially complex interactions and mechanisms that could influence fish production, such as the ability to detect and avoid fish predators. Furthermore, studies of prey detection and eye physiology should be conducted to compare the impacts of increased light levels on different species. Such studies should be performed for Arctic as well as sub-Arctic species, Varpe says, particularly because they may be meeting, and competing, more often in a future Arctic. Long-term studies of zooplankton size distributions and increased monitoring of fish distributions should be conducted to detect changes from a brighter water column and predict changes in the future.