Do alluvial islands hold the key to sturgeon habitat restoration? 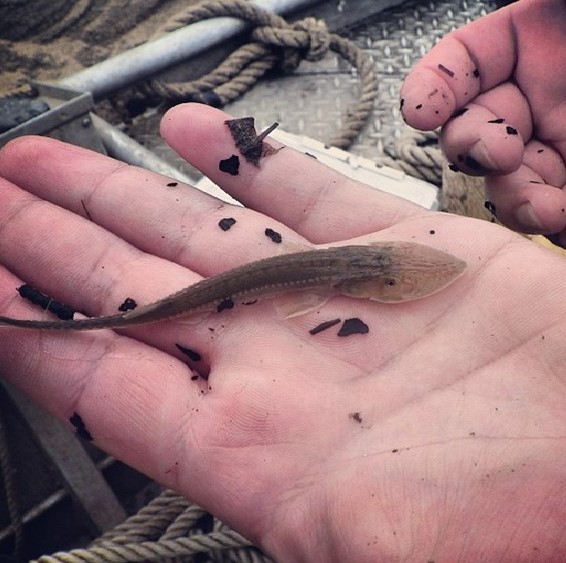 Large sandy-bottomed rivers throughout the central United States, such as the Mississippi, display disproportionately high diversity of fishes yet are some of the most altered aquatic ecosystems on the planet. These rivers have been dredged, dammed, leveed and otherwise altered to help control flooding and aid navigation. Alluvial islands (islands formed by the deposition of clay, sand, silt, or other material by flowing water) were once common through the main channel of many of these rivers, however, due to significant channel alteration very few now remain. Alluvial islands provide important fish habitat, particularly for early life stages.  With such extensive habitat modification and loss of alluvial islands, it is no wonder that many fishes that inhabit these rivers throughout all stages of their lifecycle (known as fluvial specialists) are experiencing low abundance, are endangered or are of critical conservation concern.

To learn more about the physical characteristics of alluvial islands as well as their importance for aquatic organisms, a group of researchers led by William Hintz from the Center for Fisheries, Aquaculture and Aquatic Sciences from the Southern Illinois University in Carbondale, IL studied physical habitat characteristics around two main channel islands in the middle Mississippi river. 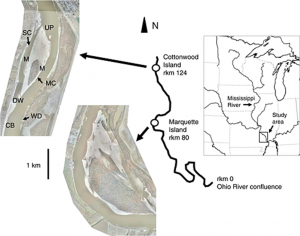 Hintz and colleagues assessed the abundance of age-0 shovelnose sturgeon (Scaphirhynchus platorynchus) near island habitats using mini-Missouri trawls. Captured sturgeon were measured for total length, the length of the fish measured from the tip of the snout to the end of tail. Genetic analyses were used to confirm that sturgeon were correctly identified as shovelnose sturgeon. Hydroacoustics (also known as sonar or an echo sounder, which uses sound waves in water to detect fish, bottom substrate or other objects) was used to characterize habitat depth and bottom substrate. Bottom substrate was characterized as silt, sand/fine gravel, solid rock or submerged vegetation such as willow or cottonwood saplings. Flow rates in meters per second (m/s) were also measured using acoustic Doppler which is a hydroacoustic current meter. The researchers assessed sturgeon abundance associated with different physical habitat characteristics. Several statistical methods were used to determine which factors (i.e. bottom substrate, mean depth, mean flow, variation in depth, and variation in flow) explained the abundance of age-0 shovelnose sturgeon. The work wasn’t without its challenges, as Hintz notes “this type of research is extremely difficult to do in large rivers like the Mississippi because of high flows, which can reduce gear efficacy. On top of that, sturgeon tend to be rare, making sampling efforts even more difficult”. 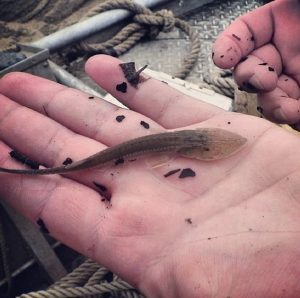 In total, 1404 shovelnose sturgeon were sampled from June – September 2010. The sites sampled had mean depths of 3.5 to 8.5 meters and a mean flow of 0.55 to 1.5 m/s. All sites had sand/fine gravel bottom substrate. Sturgeon were found in greater numbers at the downstream end of islands and in areas with submerged vegetation. Flow rates also played a role, as the greatest sturgeon abundance was observed at flow rates of 0.4 m/s. 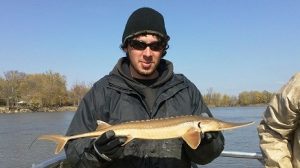 Sand dunes associated with alluvial islands provided areas of lower flow allowing larvae and organic matter to settle out. Fish larvae are able to use these habitats to reduce their energetic costs and avoid being carried downstream. Increased organic matter increases productivity and, subsequently, prey for sturgeon. However, not all sand dunes are created equal. Those with submerged vegetation such as cottonwood and willow saplings provide refuge from predators and were the ideal habitat for age-0 sturgeon. Similarly, variation in flow and depth around the dunes altered the habitat suitability, with intermediate depths and flow rates being the most suitable.  “Often, researchers seek an average of some variable to understand habitat use, but we show that heterogeneity or variability in a habitat variable can also be an extremely important part of the story”, said Hintz.

Hintz and colleagues noted that sturgeon larvae drift large distances downstream prior to settling out. They observed some age-0 sturgeon in the middle Mississippi river that originated 1000 km upstream in the Missouri River. This finding highlights the importance of suitable habitat in the middle Mississippi river for fluvial specialists such as the shovelnose sturgeon. Submerged vegetation often associated with alluvial islands are ideal habitats for young sturgeon, providing areas of lower flow and foraging opportunities that enhance sturgeon recruitment.

While it is known that alluvial islands are important for aquatic organisms, the habitat surrounding these islands has rarely been assessed. The information gathered by Hintz and colleagues, will help improve habitat models for not only shovelnose sturgeon but also other fluvial specialists and closely related species such as the endangered pallid sturgeon (S. Albus). Hintz recently commented, “We hope our research will not only inform river restoration efforts that islands are important for young sturgeon, but why islands are important to sturgeon and perhaps other riverine species.”