Winter can be an extremely challenging time for animals. To survive, animals that do not migrate or hibernate must increase their metabolism to continue functioning optimally—despite there being less food. This means that more time is spent foraging, which increases an animal’s chances of being eaten by a predator. As a result of this trade-off, animals often lose weight during this period, and can die because they are unable to eat enough. However, the trade-off between finding food and avoiding getting eaten becomes less important when there are many places to hide.

Over the course of winter, small bodies of water frequently freeze over. The ice that forms at the surface of the water acts as a barrier for aquatic animals from terrestrial predators above the surface, thereby reducing predation risks for fishes. Without the risk of being eaten by these predators, fish may be able to forage more frequently and be better able to cope with the challenges of winter. This is more important for younger/smaller fish, because they generally have lower energy reserves. Therefore, ice coverage should allow fish to grow faster during winter, since they can feed more frequently. A team of researchers led by Johan Watz, out of Karlstad University in Sweden, asked whether this is true. 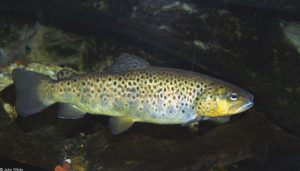 To answer this, 265 brook trout (Figure 1) were captured from Djupadalsbäcken Creek in central Sweden. These fish were measured and tagged with passive integrated transponder (PIT) tags prior to the start of winter. These PIT tags allowed the researchers to track where fish were over the duration of winter. Fish were categorized as either one-summer old, or older than one-summer based on established size distributions. To mimic ice coverage, five sections of the creek were covered with plastic sheeting (Figure 2), while another five sections were uncovered, serving as control sites. Over the course of winter, fish were tracked via handheld antennae to assess their relative use of and location in the stream (edges versus middle). At the conclusion of winter, 437 trout were captured and measured; 108 of them having been previously tagged. 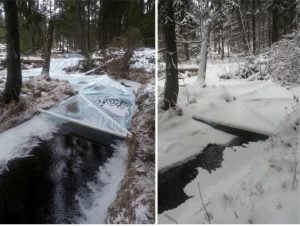 As expected, fish that spent the majority of their time under the artificial ice cover had higher growth rates than those which spent the winter in uncovered sections of the creek. This effect was greatest in one-summer old trout, as ice coverage resulted in a near doubling of their growth rates. Additionally, trout found under the ice cover spent more time in the middle of the stream, and were less frequently found hiding under the shelter of the undercut stream banks. This was especially true during the day, when predation threats would be higher. Overall, these findings suggest that these trout take advantage of the shelter provided by ice cover during winter, spending more of their time foraging to support their increased metabolism. This allows trout to maintain higher growth rates, particularly younger trout that likely have lower energy reserves and are therefore more sensitive to environmental conditions.

Being able to adequately cope with seasonal changes in the environment is vital for animals to survive and grow. Strategies to deal with these changes appear to rely on a delicate balance of interacting factors in the environment, including food and shelter availability, in order to survive the winter, and as seasonal weather changes continue to become more unpredictable, animals may begin to adjust, or even develop new survival strategies.