Blue crabs (Callinectes sapidus) are a species of crab native to estuaries along the western Atlantic coast from Nova Scotia to northern Argentina (Figure 1). They live on soft-bottom habitats and are omnivorous, feeding on almost anything they can find including bivalves, worms, fish, sea lettuce, and detritus (dead organic matter). Blue crabs are strong, agile swimmers equipped with a pair of paddle-like appendages called swimmerets that help them swim sideways, backward and even forward. In the United States, blue crabs are an economically valuable species, supporting large commercial fisheries in the Chesapeake Bay, Louisiana, North Carolina and New Jersey. Their scientific name, Callinectes sapidus, translates to “savory, beautiful swimmer”. 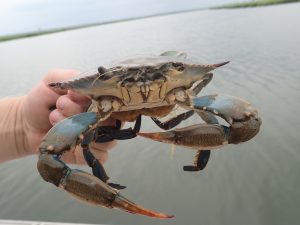 Along the East Coast of the United States, the spawning season for blue crabs spans from late spring until early autumn. Although male crabs mate multiple times throughout their lives, female blue crabs only mate once. During mating, the males transfer spermatophores, which are protein capsules containing sperm, to the females for storage. Two to nine months after mating, the female will produce 2 to 8 million eggs and fertilize them using the stored spermatophores. The female carries the mass of fertilized eggs, called a sponge, on her abdomen and migrates seaward toward the mouth of the estuary, where the eggs will hatch after about two weeks (Figure 2). 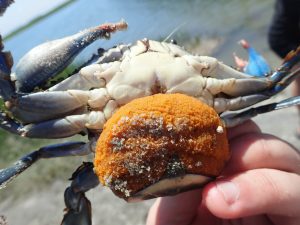 Various population characteristics of blue crabs such as abundance, sex ratios and size distributions are influenced by the physical properties of estuaries, including depth and salinity. As a result, the population structures of adult blue crabs may differ between drowned river and lagoonal estuaries. During the summers of 2008 and 2009, a team of researchers led by Dr. Paul Jivoff from Rider University examined the population structure of blue crabs in the Barnegat Bay complex in New Jersey. The Barnegat Bay complex is a lagoonal estuary made up of three embayments: Barnegat Bay, Manahawkin Bay, and Little Egg Harbor. The estuary is relatively shallow, with a mean depth of 1.5 m, and the bottom sediments consist of sand and mud. Barnegat Bay has a salinity gradient similar to a drowned river estuary due to freshwater input from several larger tributaries north of Barnegat Inlet including the Toms River, Metedeconk River, and Cedar Creek. Similar to other lagoonal estuaries, Manahawkin Bay and Little Egg Harbor do not have a salinity gradient.

To sample the population structure of adult blue crabs, the researchers conducted a trap study using commercial-style crab traps baited with Atlantic menhaden (Brevoortia tyrannus). The estuary was divided into seven sampling areas with each containing four fixed study sites (Figure 3). Salinity, water temperature, dissolved oxygen and depth were recorded by the first and last trap at each site. To evaluate the reproductive potential of both sexes, a subsample of crabs was taken to the laboratory at the Rutgers University Marine Field Station for analysis. 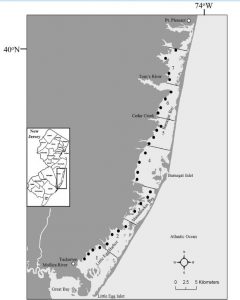 Figure 3. Locations of the study sites in the Barnegat Bay complex. The dots along the western shore of the estuary represent the four sites in the 8 km long sampling areas (from Jivoff et al. 2017).

The results suggest that salinity influenced the abundance of male blue crabs in sections of the Barnegat Bay complex. Male crabs were found to be more abundant in areas with lower salinities and the sex ratios throughout Barnegat Bay were found to be male-biased due to the salinity gradient, except in areas closest to Barnegat Inlet. There was little salinity variation in Manahawkin Bay and Little Egg Harbor and thus, there was no variation in the sex ratio or abundance between the two sexes. Ovigerous females (carrying eggs) were found to have been concentrated near the Barnegat and Little Egg Inlets between May and August.

There were distinct differences in the abundance and sex ratios of blue crabs between Barnegat Bay and the two other embayments. The female crabs concentrated on the spawning grounds near the inlets were members of two different spawning stocks. For management purposes, the reproductive status of the female crabs near inlets should be sampled to avoid overestimating the actual size of the blue crab spawning stock in lagoonal estuaries.

Blue crabs support a substantial fishery along the East and Gulf Coasts of the United States. In New Jersey, it is estimated that over 19 million crabs are harvested by commercial and recreational crabbers each year. Understanding the population dynamics of blue crabs in estuaries like Barnegat Bay is important to ensure the proper management of the species.