Seven years after the Deepwater Horizon (DWH) oil spill discharged an estimated 4.9 million barrels of oil into the Gulf of Mexico, research continues on the long-term ramifications. This spill was unique in that the blowout occurred in approximately 1500 m of water, and much of the oil never reached the surface of the ocean. Additionally, it was the first time a dispersant was used to combat a spill at depth. A collaborative study published by Charles Fisher (Penn State University), Paul Montagna (Texas A&M University), and Tracey Sutton (Nova Southeaster University) published in Oceanography Magazine in September 2016 has highlighted some of the unprecedented effects the spill had on deep-sea ecosystems. 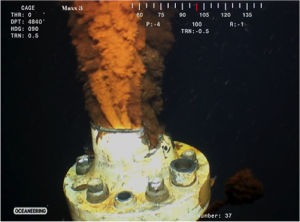 The Gulf of Mexico covers approximately 615,000 square miles, about half of which is beyond the continental shelf – generally considered the deep sea. Approximately 90% of the volume of the Gulf of Mexico is contained in areas that are more than 200 meters deep. The geography of the region is complex, which makes it extremely sensitive to perturbations, as the study found. What is also unique about this spill is that much of the oil never left the deep sea, and that which did make it to the surface later returned to the deep-sea The deep-sea ecosystem is extremely important because it provides services such as sediment stabilization, organic matter decomposition, carbon sequestration, nutrient cycling, waste absorption, and detoxification. In short, deep-sea ecosystems are vital to human well-being. 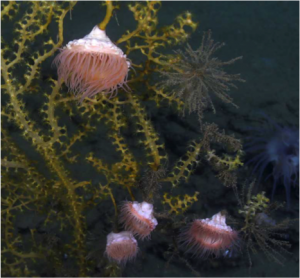 Deep sea coral with anemones. The brown materials are hydroids that settled on the dead part of the coral. Photo reproduced from C. Fisher and the Ocean Exploration.

Assessing the damage to the deep sea is challenging because it is one of the least studied and understood ecosystems on earth and is extremely difficult to access and sample. Moreover, the populations of organisms that live there, such as fishes, crabs, and other invertebrates, are patchily distributed at low densities. These deep-sea species are reliant on nutrients delivered by the Mississippi and Atchafalaya Rivers that generate plankton blooms at the surface and provide deep-sea benthos (organisms on or near the seabed) with food.

As a result of the blowout, oil spread into the food web, killing organisms that fed on plankton. Reductions in plankton grazers led to phytoplankton blooms. Entire populations of fish larvae were also likely killed. On the sea floor bottom, corals anchored to the hard seafloor were covered in flocculent material containing oil and dispersant, and soft-bottom dwellers showed no signs of recovery a year after the spill. Dissolved oxygen concentrations were lower, coupled with rapidly sinking marine oil “snow.” The release of heavy metals associated with drilling attempts following the explosion, including the DWH site, made many areas resemble a toxic waste dump. Microbial communities were altered due to the decrease in oxygen. 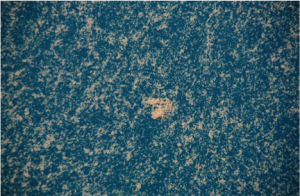 The most severe of the damages occurred within 3 km of the wellhead over an area of about 24 square km. Deep-sea surveys showed that larger species had a significantly lower abundance in these regions compared to those farther away from the site. Additionally, tests of burrow-forming golden tilefish (Lopholatilus chamaelonticeps) had among the highest concentrations of naphthalene metabolite levels measured globally. Naphthalene has many dangerous health effects, but is of high concern because it is a cancer-causing agent. Finally, although there were several deep-sea coral sites far away from the spill left unharmed, one site 13 km southwest of the well had obvious visible damage. Tests revealed that the coral tissues contained oil with characteristics of the DWH oil as well as a long-lasting component of the dispersant used to try and disperse the oil after the spill.

Although much of the visible damage from the spill has disappeared, it is important to continue studies that address the long-term effects of the DWH spill. Knowing the effects that this spill had on the deep-sea ecosystem can help scientists better understand spill effects in the event that a similar event would happen in the future.