Where are Striped Bass when they aren’t Migrating?

Striped bass (Morone saxatillis) are an important part of commercial and recreational fisheries on western Atlantic Coastline. They are anadromous species (breeding in brackish water and living in salt water) and move south in the fall from New England to warmer waters where they spend the winter. The collapse of the fishery in the 1970s due to poor environmental conditions and overfishing led to strict federal and state regulations that have aided in the coast-wide recovery of striped bass. While the fishery is currently in a healthy state, continued management in the face of habitat loss, lack of prey, and pollution is extremely important. 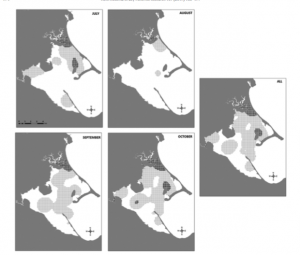 A monthly breakdown of the locations of striped Bass within PKD Bay. Darker shading indicates a 95% activity space, and lighter shading shows a 50% activity space (that is, where the fish spent the majority of their time). Photo Credit: Hollema et al.

Because of this, the migratory patterns of fish have been well documented. However, not much is known about their daily movements once they have reached coastal New England during the summer months. Hollema et al. attempted to bridge this knowledge gap in a study of the Plymouth, Kingston and Duxbury (PKD) Bay, which is located approximately 50km south of Boston.

The site was chosen because of its popularity as an angling destination during the summer months. The bay itself is a bound by two barrier beaches with a 1.6km inlet. PKD Bay has large channels surrounded by tidal creeks, sand, mudflats, and salt marshes. It has several freshwater flows, and a semidiurnal tidal range. Additionally, the bay is home to a small residential island. Estuaries are important habitats for the striped bass as they provide important forage sites for food.

To study their movements, the researches caught and tagged fish (of varying sizes and life stages) with acoustic transmitters that communicated with an array of 34 fixed receivers, deployed from May 5 to October 30, 2011. The size of each fish was recorded, and a corresponding transmitter was implanted during a simple surgical process. They measured the activity of 35 fish 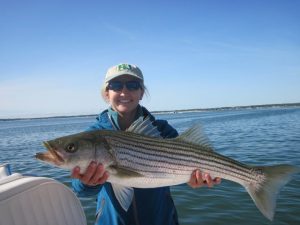 Image of the author with a striped bass. Photo credit: Heather Tyrrell.

every hour, with a center of activity (position) that represented the average geographic location of the fish. However, two bass did not have reliable detections and were excluded from the study. Overall, the authors measured 70,654 detections.

The results of their study showed that large juvenile and adult striped bass (Morona saxatillis) tended to exhibit seasonal residency inside estuaries, particularly in the spring and fall. Additionally, all but one of the fish from the study was shown to emigrate from PKD Bay during the late summer/early fall. These same fish were detected by an acoustic array in New Jersey, confirming that they left the bay to migrate south. The study also found that larger fish tended to leave the estuary earlier than juveniles. Finally, the researchers found that the fish were observed using a broad area of PKD Bay, and a wide range of habitats. This is an important discovery, as it had previously been suggested that the species prefer habitats with diverse, vertical relief (such as sandbars, bridges, or other submerged structures). The activity rate (amount of movement) by the fish themselves suggested that there is a correlation between the temperature of the water and movement rate, as well as an increase in foraging rate as the end of the season and emigration approached.