Is There Hope for the Delta Smelt? New Research Reveals a Resilient Behavior in the Critically Endangered Fish

The Delta Smelt (Hypomesus transpacificus) is a small, silvery creature. It smells like peeled cucumbers and has a lifespan of about a year. This unassuming fish has been at the center of California’s water wars for the last half century as opposing sides have parleyed in the courts over whether the Central Valley Project and the California State Water Project, California’s major irrigation and water utility infrastructure projects, threaten the now critically endangered Delta Smelt. Once a relatively abundant species in California’s Sacramento-San Joaquin Estuary, the California Department of Fish and Wildlife surveyed only 2 smelt in 2017 and none in 2018. By comparison, these same surveys were regularly returning more than 1000 smelt in the 1970s. Delta Smelt numbers began declining in serious fashion in the 1980s, coinciding with increased water diversions away from the Sacramento Delta, and in 1993 they were given protection under the Federal Endangered Species Act (ESA). Despite their legal status, many fear the Delta Smelt will become the first fish to go extinct while bearing protected status from the ESA. Though the situation for the Delta Smelt is grim, new research is providing some hope for the critically endangered fish in its wild habitat. Brian Mahardja and his team at the California Department of Fish and Wildlife and the University of California, Davis recently published an article revealing an interesting behavior in the Delta Smelt that may be helping them persist. 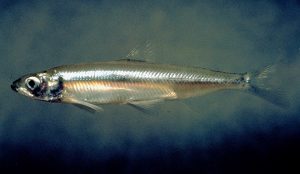 The primary floodplain of the Sacramento River in California’s Central Valley is the Yolo Bypass. The Yolo Bypass is a dead-end slough that, when flooded, provides valuable habitat for native fish species. However, less is known about the Bypass during low-flows and droughts, when the slough’s primary water sources are agricultural discharge and tidal influence. Brian Mahardja and his team decided to investigate fisheries in the Yolo Bypass during the recent drought that lasted from 2012 to 2016.

The team monitored the Bypass using a 2.5 meter rotary screw trap to sample the out-migrating juvenile fish and compared what they caught to previous surveys of the Yolo Bypass going back to 1998. They found that during the 2012-2016 drought, abundances of the Delta Smelt were higher than they had been in the previous 14 years of monitoring. In addition, Delta Smelt numbers during the drought years were much higher in the Bypass than elsewhere in the estuary, where numbers of Smelt were hitting record lows. This contrast led the team to wonder if the Yolo Bypass was acting as nursery habitat for the Delta Smelt.

To help answer whether the Yolo Bypass was acting as a nursery, they compared growth, hatch dates, and diets of Delta Smelt collected within the Bypass to fish collected in other areas during the same time period. They found that fish in the Bypass hatched earlier, had higher growth rates, and better feeding conditions. The overall health of the Delta Smelt from the Bypass suggests that the fish used the Bypass as a refuge during the 2012-2016 drought. The researchers concluded that floodplain tidal-sloughs are an important component of the habitat requirements of Delta Smelt, and should be used to promote resilience in the endangered fish.