A long way from home: Human impacts on the homing ability of salmon

Salmon runs occur when adult salmon migrate from the open ocean and swim up freshwater rivers to spawn (Figure 1). Amazingly, most salmon return to the same natal rivers where they were born, a phenomenon called ‘homing behaviour’. 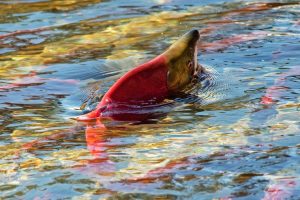 How do they do it?

Scientists think that this incredible feat is largely owed to a keen sense of smell. The idea that smell might be driving this homing behaviour was first suggested by Hasler and Wisby in 1951 and has since been tested extensively. Salmon imprint on the unique chemical composition of the water in their natal stream and adult salmon recognize this information as a cue for homing during their migration (Hasler et al. 1978). Despite the energetic costs and risks associated with the climb (Figure 2), these salmon are determined to return to their natal spawning grounds. 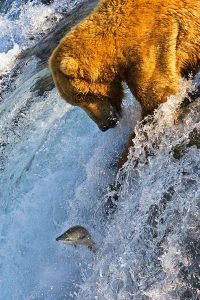 What about human impacts?

Humans are constantly changing the environment around them. Land-use change can drastically alter the chemical composition of water entering a river through a watershed. Deforestation and the removal of vegetation from surrounding areas causes decreased retention of nutrients in the soil and increased nutrient inputs to local streams, rivers and lakes. Urbanization comes with increased runoff, waste-water inputs and leaching of materials stored in landfills (Luo et al. 2018), all of which can impact the chemical cues used by salmon during their migration (Williams et al. 2019).

Why should you care?

Not only can they be fun to catch, but salmon are a keystone species that play important roles in their ecosystem. Keystone species are plants and animals that impact the success of other species around them. For example, salmon provide a critical link between freshwater and marine food webs because they are important prey for animals on land and in the ocean, such as bears and orcas! In addition to their ecological value, they are among the most important species in aquaculture. Better management efforts of wild populations and an improved understanding of human impacts will help us sustain this ecologically and economically valuable resource.

What can you do?

We can all do better to produce less waste and consume less energy. Effective waste management is a concern for every level of government and can be very costly economically and environmentally (Vergara and Tchobanoglous, 2012). We can all lessen our ecological footprint, and therefore our impact on the aquatic environment. For example, waste-water treatment facilities can become overwhelmed during intense rain showers and sometimes expel surplus untreated water into lakes and rivers (Schmitt et al. 1999) — so consider skipping a toilet flush or a shower during the next storm. Moreover, educate yourself and others. Only in recognizing a problem can we begin to identify a solution.

Hasler, A.D., Scholz, A.T. and Horrall, R.M., 1978. Olfactory imprinting and homing in Salmon: recent experiments in which salmon have been artificially imprinted to a synthetic chemical verify the olfactory hypothesis for salmon homing. American Scientist, 66(3), pp.347–355.