Marine debris is a major issue in coastal and marine ecosystems around the world. While large accumulations of floating debris, such as the Great Pacific Garbage Patch, are the most visible, some other types of debris below the surface can be just as harmful. Derelict fishing gear (DFG) refers to any commercial or recreational fishing equipment that has been lost or abandoned in the environment. Some types of gear, such as gillnets and traps (also known as pots; Figure 1), can continue fishing long after they have been lost. This phenomenon is known as “ghost fishing”. 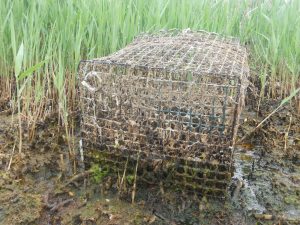 Derelict crab traps, or “ghost pots”, not only capture their intended target species, such as blue crabs (Callinectes sapidus) along the East and Gulf Coasts of the United States, but they also indiscriminately capture a wide variety of non-target species. Some of the most common species that are caught in ghost pots include white perch (Morone americana), knobbed whelks (Busycon carica), and diamondback terrapins (Malaclemys terrapin; Figure 2). When ghost fishing occurs, the organisms are unable to escape from the pot and ultimately die. The dead organisms continue to “re-bait” the trap and the cycle continues. 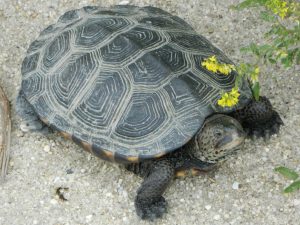 Though each blue crab fishery differs by bottom habitat and fishing technique, it is estimated that commercial crabbers lose about 25-30% of their crab pots each year. The pots can be carried throughout estuaries by currents or coastal storms and end up in habitats that were not intended to be fished when they were in the hands of the crabbers. Because of this, the true extent of ghost fishing is poorly understood in many estuaries.

Funded by the NOAA Marine Debris Program, Dr. Mark Sullivan, Steve Evert and Dr. Pete Straub from Stockton University, and Melanie Reding and Kaitlin Gannon at the Jacques Cousteau National Estuarine Research Reserve examined the extent and impacts of ghost fishing in the Mullica River-Great Bay Estuary in southern New Jersey. One of their goals was to locate and recover ghost pots from the most heavily fished portions of the estuary. The Mullica River watershed is the largest drainage in the relatively undeveloped New Jersey Pine Barrens, and the estuary is one of the least disturbed estuaries in the Northeastern United States. Most of the commercial crabbing effort in the estuary is concentrated near the mouth of the river and along the western edge of the bay.

Over the course of four winters between 2013-14 and 2016-17, the researchers used side scan sonar to locate ghost pots in the estuary. Side scan sonar uses sound waves to locate objects on the bottom. They focused on an 1800-hectare area that experiences high levels of commercial crabbing pressure and recreational vessel traffic. The researchers collaborated with commercial crabbers during the off-season (December 1st-March 14th) of the blue crab fishery who used their own vessels to assist with locating and retrieving the ghost pots. The bycatch from each crab pot was catalogued, and the commercial crabbers unloaded the recovered pots at the Stockton University Marine Field Station at the end of each day.  Each April, ghost pot processing days were held to collect additional data, including the weight and condition of the recovered pots, with the help of Stockton undergraduate students and community volunteers.

The recovery teams from Stockton and their commercial colleagues recovered 1,776 ghost pots from the estuary over the four winters (Figure 3). Commercial Maryland-style crab pots made up almost 90% of the derelict fishing gear that was recovered. At two locations where crabbing pressure is highest, Turtle Island and Basses Bay, the densities of ghost pots were as high as 318-404 pots per square-km. About 47% of the ghost pots that were recovered intact contained bycatch. 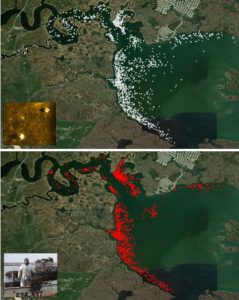 After being trained on how to use side scan sonar, the commercial crabbers had low cost sonar systems installed on their vessels to locate ghost pots. During the blue crab season, they were also able to use the sonar systems to quickly locate lost pots as soon as they noticed they were missing. Two hundred and twenty-five pots were recovered by the crabbers in-season, preventing more ghost pots from accumulating in the estuary.

Bottom habitats and fishing techniques vary between estuaries, necessitating estuary-dependent strategies for recovering ghost pots. By collaborating with commercial crabbers, the researchers were able to work with them to develop improved techniques for recovering pots. Limiting the impact of ghost fishing may also lead to an increase in the estuary’s blue crab population.