Discovering populations of Striped Bass by exploring their movement

Striped Bass Morone saxatilis (Figure 1) is a large anadromous fish which spawns in coastal rivers. Its native range spans from the St. Johns River, FL, to the St. Lawrence River in Quebec, Canada. 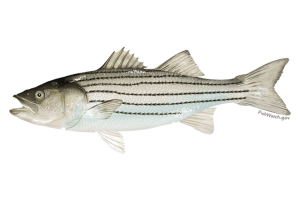 According to the 2016 National Survey of Hunting, Fishing, and Wildlife-Associated Recreation, anglers fishing for Striped Bass and other species in the genus Morone made up approximately 17% and 15% of total anglers in freshwater and saltwater, respectively. Being an important fish for both recreational and commercial fisheries, Striped Bass (commonly called Stripers) have historically been well studied in the USA. However, new and unique challenges such as climate change or dams warrant further research into how they are affecting Striper populations.

One such place is the Saint John River, New Brunswick, Canada (Figure 2). 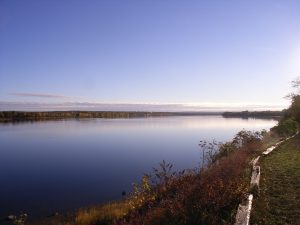 The river’s stem is blocked  by the large Mactaquac Dam completed in 1968, that impedes  Striped Bass from accessing approximately 200 km (~124 miles) of river habitat. This dam also  regulates river discharges altering physical characteristics of the river such as temperature, habitat, and flow over historic Striped Bass spawning grounds. In the years that followed the construction of Mactaquac Dam searches for spawning Stripers yielded nothing and the native Striper population was thought to have been eliminated from the river. The fish that remained were believed to be nonnative migratory Striped Bass originating from the Shubenacadie river, Nova Scotia or various US populations. Samuel Andrews, Ben Wallace, Mark Gautreau, Tommi Linnansaari, and R. Allen Curry of the University of New Brunswick sought to understand whether the fish found in the river were in fact from migratory populations that showed up after the spawning season or an undocumented population of resident fish that were spawning in the Saint John River.

To understand where Striped Bass in the Saint John River were moving, the researchers surgically implanted (Figure 3) 40 fish from approximately 16 to 36 inches with Vemco acoustic tags. 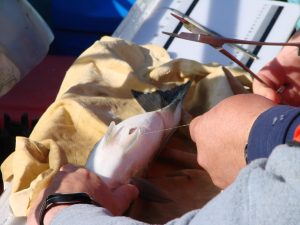 Acoustic tags are used in biotelemetry, i.e., tracking of tagged animals to determine their location. Striped Bass were tracked from 2010 to 2014 with receivers used for detection placed in strategic places along the river so the researchers could approximate the position of a given fish by knowing which receiver it passed most recently.

Striped Bass moved upstream during the suspected spawning season, with four individuals exhibiting this movement in consecutive years. This coincided with historical records of Striped Bass spawning in the St. John River. Striped Bass also used suspected overwintering sites within the river. Only six Striped Bass were detected outside of the river. These findings indicate the likely presence of resident Striped Bass that were thought to have been eradicated from the river due to the influence of hydropower dams. Although future studies are necessary to confirm spawning of Striped Bass in the river, this study demonstrates that there are resident and migratory fish to varying degrees throughout the system. This makes for complicated management that need to be considered when planning hydropower operations and continued research on these unique populations of fish.