Antarctica harbors fish species found nowhere else in the world’s oceans. Animals, including fish, are grouped together based upon similar traits or features that they’ve inherited from their ancestors. This type of grouping of animals by their shared characteristics is called taxonomy. There are many different levels of grouping animals, from the large scale domain level down to the species level. Many Antarctic fish species are grouped in a taxonomic group called Notothenioids. This order of fish is found specifically in the Southern Ocean, around New Zealand, Antarctica, and South America. They typically inhabit waters from around -2 to 10 °C (28 to 50 °F). These fish have developed diverse characteristics that allow them to live in such cold waters. These characteristics include fat deposits and low bone density that allows them to maintain their depth without using extra energy. Notothenioids also have special proteins in their blood, known as antifreeze glycoproteins, which prevent their blood and bodily fluids from freezing and allow the fish to survive in the frigid waters of the Antarctic. For most fishes, hemoglobin makes up at least 45% of their blood. However, hemoglobin only makes up 1% of the blood of Nototheniids fishes. Hemoglobin facilitates the uptake and transport of oxygen around the body. However, low concentrations of hemoglobin in Notothenioids does not prevent them from getting or transporting oxygen in their body because the extremely cold waters of the Antarctic have high oxygen concentrations; the oxygen is taken up directly by the other main component of blood, plasma.

Dornburg and colleagues from North Carolina Museum of Natural Sciences, Yale University, Southwest Fisheries Science Center (NOAA), and North Carolina State University recently studied the diversity of traits in Notothenioids, the overall specificity of Notothenioid traits to the Southern Ocean conditions, and how these traits came about. Some researchers have thought that the glacial cycles in the Southern Ocean have provided opportunity for diversification of the species that are found there. However, areas of high glacial coverage could also be associated with times of species extirpation due to damage or removal of species’ homes and resources from encroaching glaciers and ice. Since many of these species from the Southern Ocean did not go extinct during colder periods with high glacial coverage, there must have been a haven for these species during this time.  Dornburg and colleagues tested whether these Southern Ocean species either (1) leave the Southern Ocean, (2) go to deeper waters, or (3) isolate themselves into a small, high latitude areas close to shore during times of high glacial coverage. Dornburg and colleagues found that a few remote islands known collectively as the Scotian Arc allowed these fish to adapt in times of glacial advance. This archipelago is believed to serve as the gateway between the high latitude Antarctic regions, allowing for species to continue interacting with each other during periods of high glacial coverage. Specifically, their research suggests that over the past 12 million years, new species have developed in the Scotian Arc. As glaciers retreated, the Nototheniids reentered Antarctic waters. 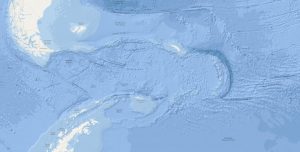 This research provides a good case study for what we can expect as glaciers retreat in the Antarctic due to increasing global temperatures in the near future. As the ocean temperature warms, these areas that facilitate the connection of Southern Ocean fish populations such as the Scotian Shelf are exposed to species invasions and new colonizers from temperate regions. This may be detrimental to Notothenioid fish that are less capable of coping with temperature shifts. These foreign species invasions and warming waters can alter the types of Antarctic fish that will be able to live in the Southern Ocean.