Urbanization and increasing human populations has resulted in higher wastewater input in riverine systems, which may affect aquatic ecosystems by changing nutrient cycles. Due to limited treatment process, wastewater treatment plants (WWTPs) are known to degrade water quality downstream and thus require particular attention. This effluent when released into nearby stream or other natural water resource, may pollute surface waters. Pollutants from WWTPs can be organic or inorganic compounds, may be persistent in nature, and can lead to poor water quality. WWTPs have been identified as an emerging point source pollution for substances like metals, pharmaceuticals and personal care products. These effects can be monitored and assessed using various water quality parameters that can indicate the health of a system (e.g., dissolved oxygen [DO], pH, temperature, salinity, nitrate, nitrogen, phosphorus and ammonia). Some of the effects of WWTPs on aquatic biota include the feminization of male fish, reduced fertilization success and egg survival, impaired health condition as well as alteration of fish population and community structure.

Dr. P.L Gillis from National Water Research Institute, Environment Canada and co-scientists studied the impacts of WWTP effluent on the distributions of a freshwater mussel species (Lasmigona costata) by comparing individuals from the Laurentian Great Lakes to mussels from one of its tributaries, the Grand River (Ontario, CA).  The Great Lakes historically supported one of the most diverse mussel faunas in Canada and comprises a large watershed with diverse human land-uses in the surrounding areas. The Grand River watershed is influenced by a large urban population serving 1 million people and receives effluent from 30 WWTPs; 11 of those have outfalls in the study area. A wide variety of pharmaceuticals and agricultural chemicals have been reported in the watershed, likely released in wastewater effluent. Many freshwater mussel species are endangered in the United States and Canada because they are particularly sensitive to habitat alteration and poor water quality.  Consequently, Gillis and co-scientists focused their study on freshwater mussel (Lasmigona costata) distribution in urban impacted areas receiving wastewater effluent. Some of these areas have also been fragmented by dams, and so the researchers also characterized mussel populations near these impounded areas. 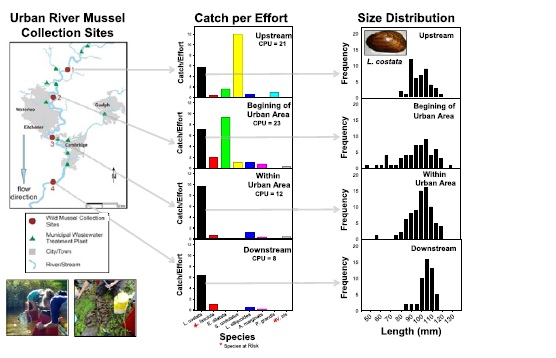 The results of the research suggest that increased input from WWTPs in the river main stem may effect mussel populations; however, further upstream in the tributary; impoundment from dams was associated with lower mussel populations.

The mussel diversity and catch per unit efforts were reduced due to the WWTP location, suggesting the poorer water quality and release of contaminants in wastewater effluent are likely reducing mussel survival or reproduction. Specifically, there was 98% drop in mussel population immediately downstream of some of the WWTP outfall. The results of this study also demonstrate a clear outcome of poor water quality and physical barriers in urban environment. Ongoing research and development is improving the WWTPs effluent composition, despite this, increasing use of chemicals in daily life may lessen that efforts, as new chemicals requiring new treatment methods for removal are being introduced. Water quality problems such as these are challenging, especially to sessile organisms like mussels, which may need more time than other species to migrate away from sources of pollution. Due to this reason, mussels can be considered a good indicator species to monitor pollution in an area. Overall, impact of WWTP in an area can be towards the reduction of the habitable space for mussels population, which in longer run can make them extinct.