The grouper who left the group: how a predatory fish is coping with its degraded coral reef habitat

Coral reefs that make up the Lakshadweep Archipelago near India supports 15 species of groupers (subfamily Epinephelidae) which either forage on a specific reef (site-attached) or by moving between reefs (roving). Coral reefs in the Indian Ocean have undergone repeated mass-bleaching events in the last two decades. Bleaching is often caused by increasing water temperatures which cannot be tolerated by the symbiotic algae which live within the corals. The algae leave the coral, leaving behind a skeleton which quickly breaks apart. The coral canopy was defined as having low structural complexity if it crumbled from three feet to under two feet tall. Grouper species which would typically be site-attached were forced to leave these reefs, except one – the peacock grouper (Cephalopholis argus). 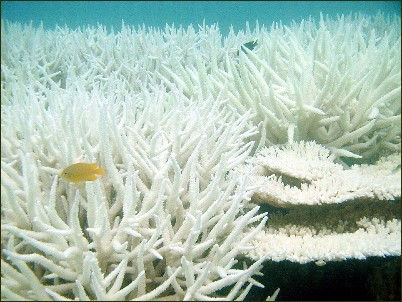 The peacock grouper is a specialist, feeding on specific fish and invertebrate species. On a healthy reef that has high structural complexity, the grouper feeds within a small territory (approximately 42 m2) over which they slowly swim through holes and crevices in the reef while moving toward their prey. They then become nearly motionless, change colour to a pale red, and dart out to capture their prey. However, this ‘ambush’ strategy was not possible as the coral reef lost structural complexity, so the peacock grouper switched strategies to be ‘widely foraging’, moving swiftly across its now expanded territory, probing the substrate, and darting toward prey without any colour change.

Increasing territory size significantly improved the chance of encountering prey. In low-complexity sites, territory size increased by 97% with every 5 cm decline in coral height. Other site-attached groupers were not as flexible in changing territory size and predation strategy, and so were found in densities 16 times lower than the peacock grouper. Surprisingly, even grouper species known to be roving predators had 3 times lower densities than the peacock grouper which had 18 fish per 500 m2. This was especially noticeable in low complexity sites where peacock groupers made up 70-90% of the total grouper count versus only 40% in the high complexity sites. The decline in competitors could be an advantage for the remaining grouper species.

The researchers also found a shift in prey density between high and low complexity sites, with invertebrates dominating low complexity sites and fish prevailing at the high complexity sites. Despite these differences and the reduced availability of their preferred prey, peacock groupers were able to maintain their specialized diet. Predators are typically forced to broaden their diet to take advantage of available prey in degraded habitats. Currently, the persistent peacock grouper have managed to cope with the degraded habitat through shifts in territory size and foraging strategy, but if the coral reefs degrade further they may also have to shift their diet.

This study provides hope that rapid environmental change may not necessarily mean an inevitable loss of specialist species and the ecosystem functions they provide.