Ghosts, Ghouls, and Goblin-Sharks! Fish Habitat at its Spookiest!

It’s that magical time of year when ghosts and ghouls and goblin-sharks come out to steal your sole: Halloween! And while we can probably name any number of reel scary, spooky, or just plain horrifying fish species (I’m looking at you Dragonfish), there are many areas where fish live that might also give you the creeps! Stay perched on the edge of your seat while I dive into the details of a few of these terrifying, and sometimes ghostly, habitats.

Deep-sea habitats aren’t just spooky because they’re host to some of the most nightmare-inducing fish species on the planet. With waters deeper than 1000 m that cover more than 60% of the planet, these habitats are still relatively unexplored by humans [1]. Despite this, recent technology has facilitated a better understanding of the deep-sea and the diversity of life it contains; life that has adapted to a cold environment with no sunlight. Remotely operated submersibles, underwater video, deep-sea submarines, and sonar have given us the ability to travel or observe these environments and the truly unique organisms that live there.  Many of the fish species that live in these environments grow slowly, are long-lived (some live up to 200 years!), and they can’t reproduce until they’ve had several to many years to grow [2]. For example, female White Anglerfish are around 14 years old when they become sexually mature, and are almost a meter long [3]! Many deep-sea fish species have adaptations to this spooky environment. For example, several species have morphological adaptations, such as big scales and weak skin, to the low-turbulence you find in the deep-sea [1]. Another unique adaptation to the deep-sea is an enhanced ability to see bioluminescence [4]. Bioluminescence is light produced and emitted by living organisms, and it’s not uncommon for deep-sea organisms to produce light. 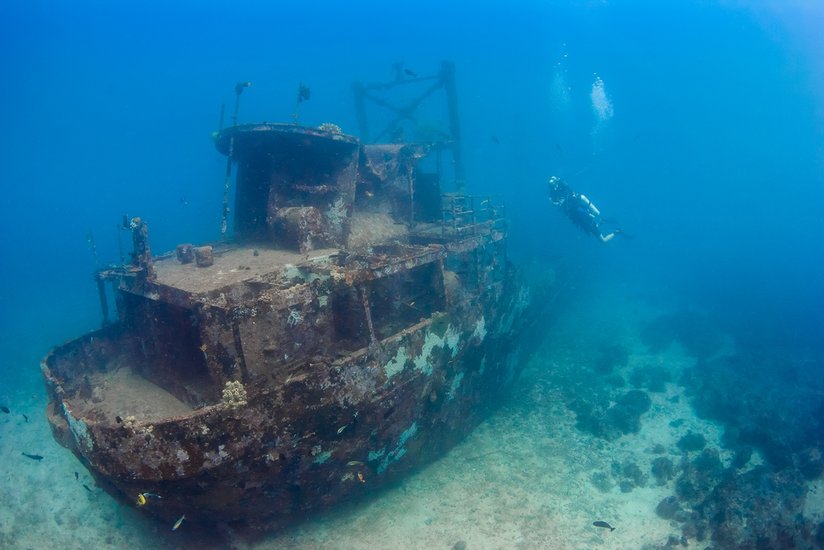 Shipwrecks have been the focus of some ghostly, eerie tales. But they also make great fish habitat! Sunken ships can provide habitat similar to trees that have fallen into lakes, streams, and other water bodies [5], and can create reef-like habitat by increasing habitat complexity [6]. These habitats generally attract fish, and have higher fish species diversity and abundance than the soft-bottomed, low-complexity habitats around them [6], in part because they provide a higher surface area for algae, bacteria, and sessile organisms to attach to. This can increase the amount of food available for fish. Additionally, these sunken vessels can provide cover from predators for fish. In some instances, ships may be intentionally sunk to create fish habitat (http://sciencenetlinks.com/science-news/science-updates/ships-reefs/). In these cases, the ships are usually cleaned and prepared to be sunk so that no toxic or harmful chemicals are released during the sinking.

Above, I’ve listed some examples of some spooky places where fish live, and hopefully it has you hooked on fish habitat and makes you want to goby a fish for Halloween! I hope you and your groupers don’t have a hoki time. Okay, I’ll stop with the fish puns now . . .