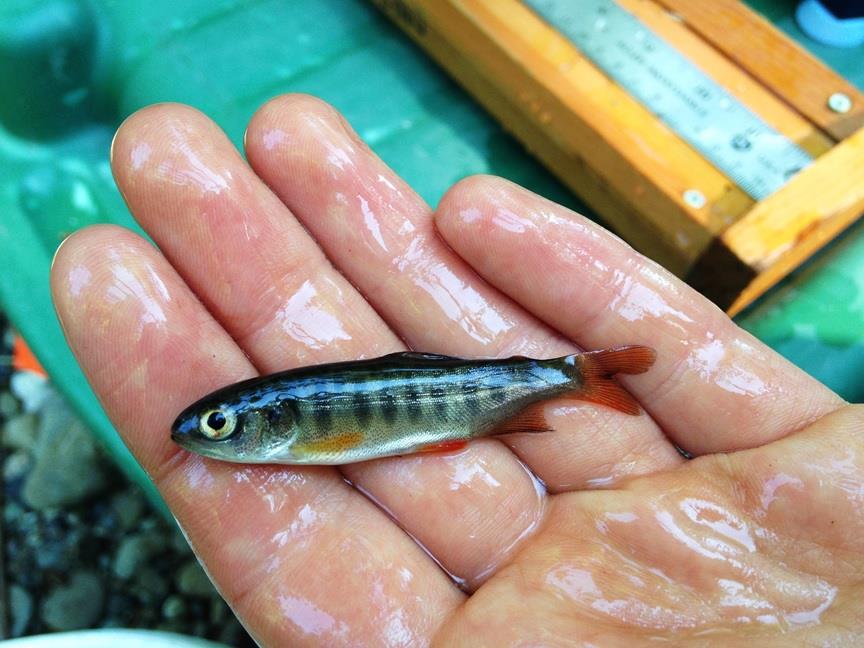 Streams can be thought of as an open-concept house for fish. Every hydrological feature, like a room, serves a unique function while flowing seamlessly (and stylishly) together to create an integrated living space (Figure 1). Riffles act like a kitchen: water moves quickly over substrate, sweeping up aquatic bugs that emerge from gravel, and send them tumbling downstream in the current, eventually dumping them in deep, slow pools—the dining room, where salmonids (trout and salmon) eagerly await a meal. Salmonids save energy that would be spent on swimming and capturing prey by staying in these slower waters adjacent to swift moving current. As a result, the trout can devote more calories from each ingested bug to growth and reproduction—the keys to ecological success.

Restoring salmonid habitat, as with remodeling a house, is only successful if it accommodates the inhabitants’ lifestyles. Salmonids have big appetites, so increasing the number of riffles and pools leads to increasing fish production (a population’s collective accumulation of mass). But what is more important for growing lots of big salmon and trout? The kitchen (where all the food comes from) or the dining room (where all the food is eaten)? How does production shift if the fish mostly “dine-out” on terrestrial prey items like ants, caterpillars, and spiders? Dr. Sean Naman and colleagues from the University of British Columbia, the Ministry of the Environment, and the Northwest Fisheries Science Center teamed up to investigate the food-space tradeoff for juvenile salmonids in stream habitats.  If a habitat is mostly riffles, then there would be lots of food but nowhere to eat it.  If the habitat is mostly pool, then there would not be enough food. They hypothesized that if bugs from the riffles were the primary food source, then trout production would peak at an intermediate ratio of pools to riffles.  However, if the fish were mostly ‘dining out’ on terrestrial prey, then riffles which normally supply aquatic prey would not be as important, and production would increase with increasing pool area (where terrestrial prey are still deposited). 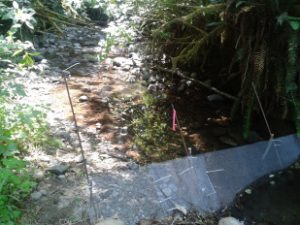 To test the effect of the proportion of riffles:pools on total fish production, the researchers constructed 13 enclosures along a 2-kilometer reach of 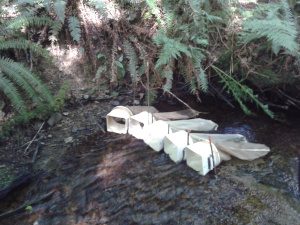 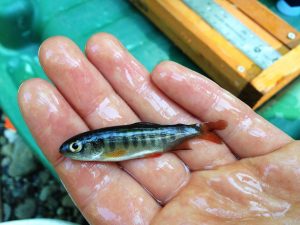 Webster Creek in the Cascade Mountains of Washington State (Figure 2). Each enclosure had an upstream riffle and a downstream pool, with the proportion of enclosure area composed of pool ranging from 14%-80%. They stocked each enclosure with equal numbers per m2 of uniquely tagged juvenile coho salmon (Oncorhynchus kisutch) and cutthroat trout (O. clarki) and measured individual growth over the course of a month (Figure 3). They snorkeled to observe habitat use and feeding behavior of the stocked fish, and sampled the availability of prey drifting in the water column and falling into the stream from terrestrial sources (Figure 4).

The findings were consistent with the hypothesis that an intermediate pool proportion drives salmonid production. Juvenile salmonids overwhelmingly utilized pool habitat, but prey availability declined as the proportion of riffle in the enclosure decreased. As a result, the juvenile coho salmon and cutthroat trout had the highest production rates in enclosures that were approximately 45% pool. This means that in an ideal salmonid “house”, the kitchen should be slightly larger than the dining room. In simulations where the magnitude of terrestrial prey inputs was controlled, the researchers confirmed a more linear relationship, where salmonid production increased as pool area increased. Basically, if the salmon switch from home-cooked meals to take-out, then there is no limit to dining room size.

This experiment emphasizes importance of holistic restoration efforts that consider all aspects of living space. Habitat restoration has to go beyond beautification and superficial makeovers that look good to humans. Managers and engineers tasked with improving stocks must consider not only the preferred habitat of the focal species, but also the habitat of prey- such as riffles. This research also provides a feng-shui suggestion: an intermediate proportion of riffle:pool will optimally guide the flow of energy (in the form of bug calories) downstream, benefitting the productivity and prosperity of the stream’s inhabitants (Figure 5).