Survival of the lazy and stressed? Angling targets active and stress-resilient trout 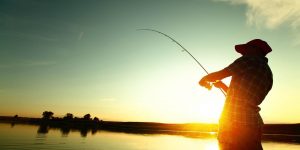 After a long week, one of the most enjoyable and relaxing activities that many people can think of is to venture into the outdoors and go fishing (Figure 1). In Canada alone, approximately 3.3 million adults contribute over $8.3 billion (CAD) per year to local economies through activities related to recreational fishing (Fisheries and Oceans Canada, 2010). Despite its popularity, very few people consider the impact that recreational angling has on fish populations. Many people have favourite ‘hotspots’ that they frequently return to, often as a result of prior successes. However, these prior successes can have drastic effects on fish populations, even if fish are only briefly handled and then released. Additionally, many regions stock rivers and lakes with fish that were raised in hatcheries in an effort to keep population numbers high and maintain satisfaction among anglers. Despite this, the effects of angling on fish populations, especially those containing hatchery-raised individuals, remain unclear. To better understand these effects, a group of researchers from the University of Gothenburg in Sweden set out to determine how prior experience with angling influenced the likelihood of a fish being caught, as well as whether angling targets individuals that exhibit specific traits. 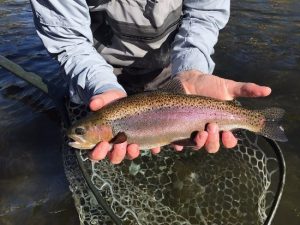 The team of researchers, led by Dr. Barbara Koeck, set up four artificial ponds that each contained 25 rainbow trout (Figure 2) and 25 brook trout. Both species had been raised in a nearby hatchery, but the parents of the brook trout had been caught in the wild, while the rainbow trout were from a domesticated line that had been bred in the hatchery since 1997. Prior to placing fish into the ponds, each individual was tagged with a passive integrated transponder (PIT-tag) that allowed the researchers to track each individual’s movement to assess activity. Approximately a month after the fish had been placed into the ponds, a group of anglers were invited to fish two of the ponds over 10 days. During the first 5 days the anglers used a baited hook, while artificial lures were used during the second 5 days.  When fish were caught they were placed into a separate tank and returned to the pond at the end of each day, to avoid repeatedly catching the same fish in one day. The researchers recorded the order that each fish was caught each day. Following this experiment, the anglers then fished the two ponds that they had previously angled, as well as the two ponds that had not been angled to see whether prior experience influenced the probability of being caught. At the end of the experiments, the researchers measured circulating cortisol levels following placement into a novel environment. Cortisol is a hormone involved in the regulation of metabolism, and its production increases during periods of stress. As such, it is commonly used as an indicator of an individual’s ability to cope with stress, with low responses indicating resiliency to stress and high responses indicating susceptibility to stress.

The researchers found that fish which had previously been exposed to angling were less likely to be recaptured compared to fish in ponds that had never been angled. They also found that rainbow trout were caught more quickly and more frequently than brown trout, but only when using baited hooks—not when using lures. The researchers suggest that this result could be an effect of the rainbow trout being domesticated. Domestication often causes animals to become less afraid and consequently are typically more likely to investigate foreign items, such as hooks. Interestingly, the team found that rainbow trout which were more easily caught were more active and exhibited a lower cortisol response to the novel environment. This suggests that angling may cause heavily-fished regions to become biased towards populations containing individuals that are more susceptible to stress and are less active; traits that are not ideal for populations of large predatory fish. No such pattern was observed among brown trout, suggesting either species-specific and/or domestication-specific differences that influence the probability of being caught by anglers.

While many people fish to relieve stress and enjoy nature, it is important to understand the potential impacts that recreational angling can have. In order to maintain diverse, healthy populations of fish we need to continue to improve our knowledge of how our actions impact fish communities, as well as the differences that exist between different individuals and species.