What’s that in the water? Using fish eDNA to test effectiveness of fish ladders 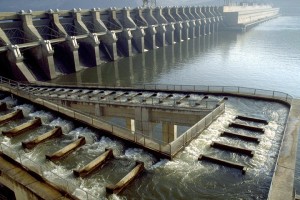 Dams can often interfere with a fish’s ability to travel up or down a river. To increase fish migration ability, a variety of modifications can be made to the dam. One such modification is a fish ladder. But when a fish ladder is built, how do you know whether or not fish are able to use it? You could watch the fish ladder or tag fish (mark and recapture methods) to see if they are able to cross. What if it was as easy as collecting some water on either side of the dam? In their paper, recently published in Ecological Indicators, Yamanaka and Minamoto propose using environmental DNA (eDNA) to monitor fish passage through dams. eDNA is DNA fragments fish leave in the water. Because DNA is species-specific, eDNA can indicate if a particular fish species is present in a water body.

The Yodo River is a major river of Osaka Prefecture, Japan that connects Osaka Bay to Lake Biwa. It is also an important migration pathway for two marine species (Temperate Seabass and Flathead Grey Mullet) and a freshwater species (Ayu). Two of these species (Temperate Seabass and Ayu) are important food species. All three fish species migrate up the Yodo River each spring to feed and grow. Three major dams on the Yodo River, however, make migration on the river difficult for these fish. Additionally, only the dam closest to Osaka Bay includes a fish ladder, which makes it easier for fish to cross this dam. The other two upstream dams do not include fish ladders or any other mechanisms specifically designed to make fish passage easier. 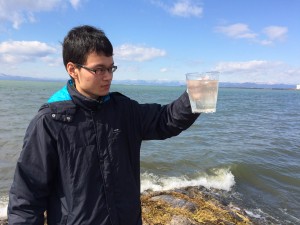 To see if the fish ladders increased migration ability for these fish species, Yamanaka and Minamoto collected river water from 15 different sampling sites. These water samples were then tested to determine if eDNA matching the three fish species (Temperate Seabass, Flathead Grey Mullet, and Ayu) was present at various locations upstream and downstream of the three dams on the Yodo River. The authors were able to collect and analyze water samples from all of their sites in only three days! This three-day process was repeated each month, for one year total, so that they could see how migration patterns changed over time. What they found was that eDNA from all three fish species was found upstream of the first dam, suggesting that the fish were able to utilize the fish ladder and cross the dam. Upstream of the second and third dams, however, no eDNA from either Temperate Seabass or Grey Mullet was detected at any point during the year, suggesting that these species were not able to cross these dams.

When using eDNA, however, it is important to remember that the DNA could have come from a different population than the one you were tracking. For example, the authors found Ayu eDNA upstream of both the second and third dams and were unable to determine if the eDNA came from migrating Ayu, young Ayu released into the Yodo river by fisheries managers, or an Ayu population located in nearby Lake Biwa.

By testing water samples for fish species-specific eDNA, Yamanaka and Minamoto were able to track the migration of Seabass, Mullet, and Ayu from Osaka Bay (bottom) to Lake Biwa (top) throughout the year (red is summer months, blue is winter months, white indicates no eDNA was detected that month).

Despite these drawbacks, eDNA can still be a useful tool to track fish migration patterns. As Dr. Yamanaka explains, eDNA decomposes at a known rate. Additionally, water flow (which moves eDNA down the river) is relatively easy to measure. By combining the eDNA decomposition rate and river flow rate, researchers may be able to determine fish migration by estimating the position and concentration of species-specific eDNA at multiple sites along a river or other migration pathway (Yamanaka, personal communication). Additionally, eDNA can be a much cheaper and faster way to monitor fish migration and a fish’s ability to cross obstacles along the migration pathway.

Yamanaka, H. and Minamoto, T. 2016. The use of environmental DNA of fishes as an efficient method of determining habitat connectivity. Ecological Indicators 62:147 – 153.