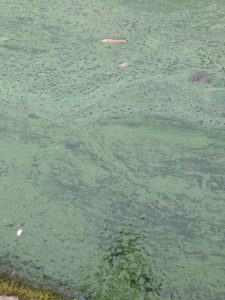 Lake Erie has a long history of cultural eutrophication (excessive nutrient inputs), algal blooms and low oxygen levels. A widespread campaign in the 1970s to eliminate phosphorus from household detergents, fertilizers and other products resulted in a temporary improvement in ecosystem health during the 1980s. In recent decades, however, nutrient inputs in the form of soluble reactive phosphorus have re-emerged from several Ohio tributaries (Maumee, Sandusky and Cuyahoga rivers) and resulted in algal blooms and low oxygen conditions of increasing severity.

Lake Erie often experiences rather large (~5,000 – 10,000 km2), seasonal low oxygen zones that are believed to displace fish from ideal habitats into nearby areas with higher oxygen that are often less desirable habitats. This displacement results in a change in diet and subsequent impacts upon growth and reproduction. In shifting to areas of higher oxygen, fish often find themselves clustered along low oxygen zones. This spatial clustering of fish has been hypothesized to increase their vulnerability to commercial fishing gears. For example, Lake Erie commercial fishermen have reported increased catch rates of Yellow Perch (Perca flavescens) in trap nets set along the margins of these low oxygen zones. 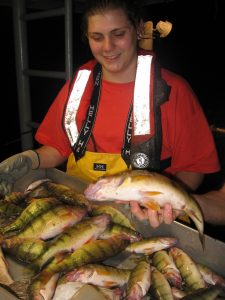 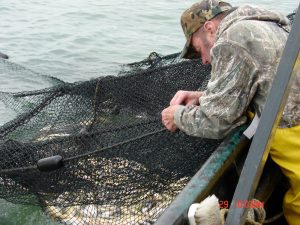 A team of researchers lead by Richard Kraus from the US Geological Survey, Great Lakes Science Center, Lake Erie Biological Station sought to learn more about fish abundance and catchability (susceptibility to fishing) along Lake Erie low oxygen zones.  Kraus and colleagues made use of oxygen and temperature data loggers placed along the bottom, temperature and dissolved oxygen water column profiles, as well as hydroacoustic technologies to determine oxygen levels in association with fish densities and vertical distributions. Data were collected near Fairport Harbour, Ohio during the months of August and September of 2011 – 2013. 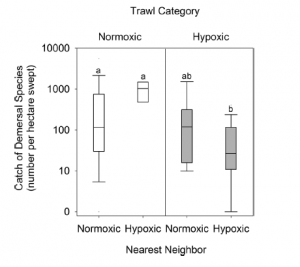 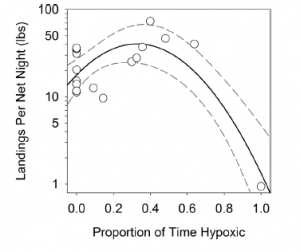 Highest landings in commercial traps were found in zones that were hypoxic (low oxygen) about 30-50% of the time. Reproduced from Kraus et al. (2015).

The trawl data and commercial trap net data suggest that fish have a higher catchability around low oxygen zones. These findings have important implications for the management of fish populations in Lake Erie. Models used to estimate fish abundance rely upon the assumption that catchability is constant across regions and that catch is related to fish abundance (e.g. as fish abundance decreases so will catch rates). However, as this study illustrates, catch rates may increase near low oxygen zones. This may lead to inflated fish abundance estimates putting the population at potential risk of overfishing and fishery collapse. The findings have been well received by the scientific community and have been of practical significance, Kraus recently commented that “Lake Erie fishery managers were quite interested in the findings, and are in the process of using this information to recommend improvements to recruitment surveys”.