Arapaima gigas, a migratory Amazonian fish species that could benefit from a system of protected areas (PAs) that take metapopulation structure into consideration. © Citron / CC-BY-SA-3.0

Because the Amazon floodplain is so large and many fish species are migratory, no one lake is likely to contain a majority of the fish species that are found throughout the entire floodplain. As a result, in order to conserve the richness of Amazonian fish species, it is necessary to consider species diversity on both local and regional scales. Additionally, it is often difficult to determine if populations exist as a metapopulation or a series of discrete populations. Increased anthropogenic disturbances, leading to greater disruption of habitat connectivity in the floodplain, however, may lead more fish populations to form a metapopulation structure. Thus, as explained by the authors, thinking of Amazonian fish populations as metapopulations can help conserve biodiversity at a regional scale and highlights the importance of habitat connectivity to these populations.

There are 2 main threats to habitat connectivity in the Amazon: droughts and hydroelectric dams. Droughts decrease habitat connectivity because streams and other water channels dry up, creating lakes in the floodplain that have little or no connection to the main Amazon River channel. Although droughts are a normal part of the Amazon River water cycle, they are getting worse due to climate change and increased deforestation. A large part of the increased deforestation is due to the construction of hydroelectric dams in the Amazon basin. Currently there are 18 dams operating in the Amazon Basin, plus 8 hydroelectric dams that are under construction, 53 dams planned for construction, and 62 additional areas identified as potential dam sites for future construction. 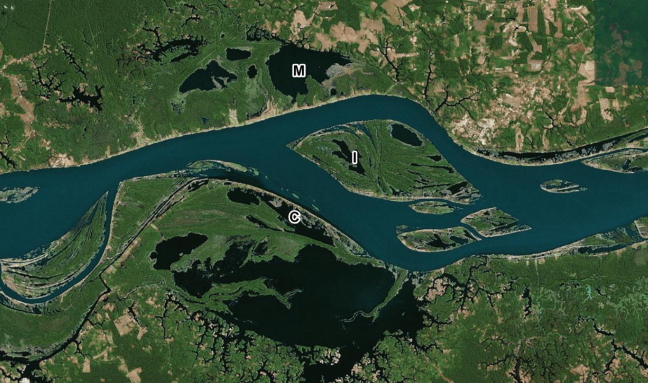 Figure 2 from Hurd et al. 2016. Different types of Amazonian floodplain lakes based on their proximity to the main river channel. M = upland (mainland) lake that is farthest from the main river channel and may lose connectivity with the river and adjacent floodplain lakes during low water season. I = island lake, which shrinks in area during dry season but remains connected to the river through surrounding flooded forests. C= coastal lake, which remains connected to the river through narrow channels during low water.

In addition to the migratory species, the loss of habitat connectivity also affect fish that rely on access to food sources in the surrounding flooded forests. Inability to access these food sources can interrupt the life cycles of these fish (Hurd, personal communication).

In order to protect fish populations in the face of decreasing habitat connectivity, Hurd et al. propose the creation of strategically located freshwater protected areas (PAs) as a solution. Although protected areas are popular in terrestrial and marine environments, they are much less common for freshwater habitats. One challenge to implementing PAs might be the lack of data on population dynamics and species distributions available for freshwater species. Designing preserves to maximize connectivity among lakes in the Amazon floodplain, especially during the dry season, could help mitigate some of these data challenges and also maximize habitat connectivity for fish populations. Doing so could help conserve these floodplain fish populations and protect overall biodiversity in the Amazon floodplain.