You’re in a canoe floating down the river, and you hear a splash not far off. By the time you turn your head, the cause of this sound is now a mystery, gone back beneath the surface. We are endlessly curious about what creatures lie beneath, and what they might be doing. 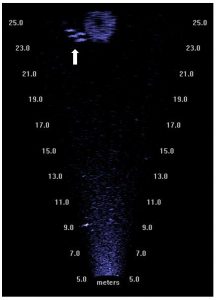 We’ve been able to get our feet wet with underwater cameras (such as the ever popular GoPro™), but such optical cameras are restricted by the need for ambient light. In order to satisfy our curiosity about underwater activities at night, we need high-tech imaging. Dual-Frequency Identification Sonar, DIDSON, allows for high resolution images and videos, underwater and at night, allowing us to spy on life under the surface.

Manuel Langkau and colleagues used the DIDSON to gather much needed information about Allis shad (Alosa alosa) spawning behaviour. The fish experience a variety of threats including commercial fishing, dams, and habitat degradation, earning them protected status and a reintroduction programme led by the European Union-Life Project. Currently, spawning activities are monitored using acoustic telemetry and hearing surveys, which have their limitations. Telemetry involves attaching pinging tags to fish which can be monitored using receivers. Hearing surveys are simply listening for an audible sound made by the mating male shad. These methods provide a general idea of fish location and activity, but do not allow you to see what goes on when the shad come together to mate.

The authors planned their nighttime stakeout by mounting a DIDSON device below a hydroelectric power plant, and at the same time performing hearing surveys. The DIDSON device was able to detect spawning activity by recording a specific swimming pattern – fish moving rapidly in a circle near the surface, and if mating was successful then the video also captured the release of sexual products (eggs and sperm) into the water column as a cloud (see below). In just 3 nights they detected 372 mating clouds!

They found that spawning detections were consistent with the sound of the bulls, peaking between 1:30 and 2:00am. But what they couldn’t hear was who came to the party. By watching the video, they discovered that spawning among pairs of fish occurred 70% of the time; however, 30% of the time there were up to 7 fish leaving the cloud! The next question on the researchers’ minds is whether the extra fish were ‘invited’ for group spawning, or if these are males sneaking into the spawning at the last moment due to their decreased desirability as a mate.

These new insights into Allis Shad spawning will help inform how to best structure the reintroduction programme to help recover the species. Data from the DIDSON method can be used for population models incorporating information about spawning activity and success. Monitoring underwater activities, especially at night, is a challenge. Using high-tech tools with careful interpretation can allow us to finally see the fins below the splash.