Fisheries scientists often rely upon models to assess various aspects of fish populations, such as fish habitat in streams. An understanding of fish habitat quality is vital in determining the health of fish populations. Traditionally, stream habitat modeling has focused on stream and terrestrial variables such as land use, geology, topography, water temperature, pH, turbidity, stream velocity, etc. but has failed to consider nearby lakes and their influence on streams, fish and fish habitat. To address this disconnect between lake-stream connectivity and stream habitat modeling, Marc Pépino, Marco A. Rodríguez and Pierre Magnan from the University of Québec at Trois-Rivières sought to determine if incorporating lake presence/absence as a variable in fish habitat modeling could help improve knowledge of fish abundance in streams. “It was very surprising for us to realize that among the numerous fish habitat models that are applicable at the landscape scale, very few used aquatic landscape attributes” said Pépino. 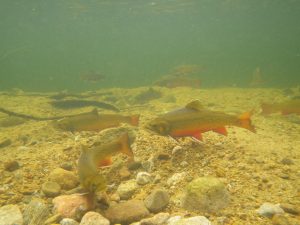 From 2006-2008, Pépino and colleagues assessed brook trout Salvelinus fontinalis abundance in 36 streams throughout the Jacques-Cartier National Park and the Laurentides Wildlife Reserve in Québec, Canada (Figure 2). Pépino commented: “… systems where both lakes and streams are present are needed to study the interactions between lakes and streams. The Laurentide Wildlife Reserve was an ideal system for that.” In order to study these interactions, they surveyed two-hundred and twelve stream sections using single pass electrofishing surveys. Electrofishing is a non-lethal method of sampling fish populations that involves passing an electrical current through the water to temporarily stun fish. Fish can then be captured, identified, and counted before they are released. 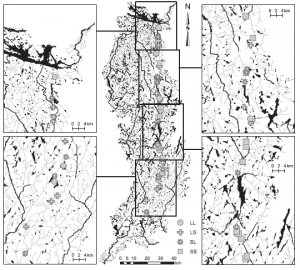 Figure 2. Location of streams surveyed within the catchment basin. Streams were located within the Jacques-Cartier National Park and the Laurentides Wildlife Reserve in Quebec, Canada (reproduced from Pépino et al 2016).

Using a model they were able to compare brook trout abundance to stream classification (not connected to a lake SS, lake tributaries SL, lake outlets LS and both tributaries and outlets LL; Figure 3) as well as stream width. Making use of relative abundance (the number of fish observed based on habitat area) rather than raw counts of fish allowed the researchers to effectively compare abundance between stream reaches. Raw counts would have simply given the number of fish regardless of the area surveyed which could lead to unfair comparisons between areas sampled.  Overall, they observed higher brook trout abundance in streams that were connected to a lake. Brook trout abundance was greater in narrow streams compared to wide streams, this effect was amplified when a lake was located upstream. The difference in abundance between stream classification also increased as stream width decreased

Figure 3. Relationship between brook trout abundance and stream width, by stream configuration. Stream configurations are illustrated above the graphs with lines representing stream and circles representing lakes. Streams were classified as not connected to a lake (SS), lake tributaries (SL), lake outlets (LS) and both tributaries and lake outlets (LL) (reproduced from from Pépino et al 2016). 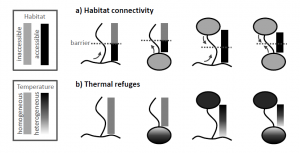 This work highlights the importance of including lake absence/presence in stream habitat modelling.  Incorporating lakes into stream habitat modelling will help improve fish habitat models and allow scientists to have a better understanding of the implications of lake-stream interactions for stream fish species. The authors point out specific applications of their findings including studying barriers to fish passage and temperature variations in stream-lake networks (Figure 4).  While the results have only recently been published in the Canadian Journal of Fisheries and Aquatic Sciences the authors are hopeful that their findings will soon be put into practice. Pépino recently commented “we hope that this article will stimulate other researchers to test fish habitat models incorporating lake-stream interactions in other systems and with other fish species. The data and statistical tools to test these models are available.”