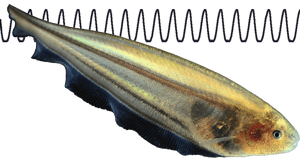 Direct observation of animals in their natural habitat is a cornerstone of natural history and ecology, but observing aquatic organisms presents numerous challenges because they live under water. Intrepid scientists and enthusiasts have breached the aquatic barrier with snorkel and scuba gear, while hydrophobic researchers have deployed underwater cameras to learn about fish behaviors and habitat use. Other methods such as radio and acoustic transmitters and antennae arrays are also useful for indirect observation.  Unfortunately, some fishes’ lifestyles or the conditions in which they live are not always conducive for scientific peeping. For example, many species of fish in the remote Amazon basin are nocturnal and occupy complex, densely vegetated habitats where the water is shallow and perpetually murky. Conducting behavioral observations by eye or camera is impossible under these conditions! Scientists from Johns Hopkins University turned to a fish that lives in this environment to find a solution to this observational quagmire.

Figure 1. Electric field around a knifefish sensing a nonconductive object

Rather than rely on sight, smell, or their lateral line, some members of the South American order Gymnotiformes use electricity to ‘visualize’ their dark, murky world. Knifefish are widespread through the Amazon basin and use specialized cells in their tails to discharge a weak, high-frequency electric field around their body to communicate with other fish and locate prey (Figure 1). The electric fields are unique among species, sexes, and even individuals, and can be detected up to 2m away.

In collaboration with mechanical engineers, the researchers at Johns Hopkins created a technology that capitalized on the knifefish’s weak electric field in order to track the fish’s fine-scale movements in natural environments. They built custom electrodes to ‘eavesdrop’ the knifefish species Eigenmannia virescens by recording the high frequency pulses they emit (Figure 2, left panel). Nine electrodes were mounted to a floating 1.5m grid made of PVC.  To calibrate the system, recordings were sent to software with algorithms that first identifies the unique signals (called harmonic signatures) emitted from individual fish. Next, the software uses statistics to estimate each fish’s orientation and location by comparing measured signal sources to simulated ones. The system performs these calculations while the fish moves through space, tracking it like a motion-sensitive camera and recording its path like a GPS (Figure 2, right panel). Their system is relatively inexpensive, doesn’t require much energy, and can be assembled in the field and left there to remotely collect and upload data.  Though it cannot resolve complex, close interactions like nipping or displays, the system is designed to estimate the number of fish and their movements while schooling and interacting. The system can also be scaled up for widespread monitoring. This is an exciting technology that can advance our understanding of Eigenmannia virescens and hopefully many other weakly electric fish. 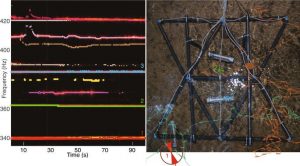 Creative solutions to the challenges of observing fish and other aquatic organisms in their natural habitat will continue to be a boon for both species and habitat conservation.  Technologies that are robust to poor visibility conditions common in aquatic systems are especially useful but require alternative modes of ‘seeing’. This electrode grid is a great example of how interdisciplinary collaboration and inspiration from nature can dissolve barriers in aquatic research.

Check out this video to learn more about electric fish research at Johns Hopkins: https://www.youtube.com/watch?v=3LsBse8WKm4