Our climate is changing, but it can be difficult to understand the scope and scale of that change when presented with statistics that address long-term trends. For example, we know that lakes in Wisconsin are warming at 0.042°C/yr (Winslow et al. 2015), but what does that mean for someone who spends time on those lakes? Dr. Gretchen Hansen is a Fisheries Systems Ecologist for the Minnesota DNR, who says that her best childhood memories are of time spent at her family’s cabin on a Wisconsin lake. Wanting to know how climate change could affect such lakes, she set out with colleagues to study the effects of climate change on two of the most important game fish species in the upper Midwest: Walleye Sander vitreus and Largemouth Bass Micropterus salmoides. In the process, they produced a startling prediction about Wisconsin lakes later this century: Walleye were predicted to reproduce naturally in 33-75% fewer lakes than today, and the number of lakes supporting natural Largemouth Bass populations would increase by 27 -60% (Hansen et al. 2016). 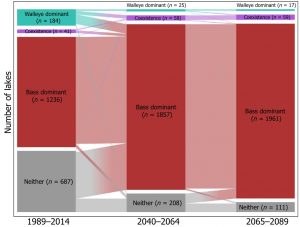 Yes, up to 75% fewer lakes with self-sustaining Walleye populations.

Any angler, baitshop owner, tackle retailer, hotel operator, or restaurant owner in the upper Midwest reading this is probably now sitting straight up in their chair wondering 1) how could Hansen and her colleagues come to such a conclusion and 2) what can we do to avoid this fate?

Hansen and colleagues showed that Walleye and Largemouth Bass thrive in lakes with different water temperature characteristics; Walleye require cooler water to naturally reproduce, and Largemouth Bass densities are likely to be highest in warmer lakes. So, they addressed the difficult challenge of using air temperature to predict current and future water temperatures in over 2,000 Wisconsin lakes. Water temperatures are not predicted to rise at the same rate as air temperatures, because lakes are covered in ice for part of the year and many lakes have a cool layer of water at the bottom that doesn’t mix with the upper water column. So, the scientists used a complex model that incorporates the thermodynamics of each lake based on its size, depth, and water clarity. They used this model to predict a cumulative measure of water temperature throughout the lake over the course of the year called degree days. 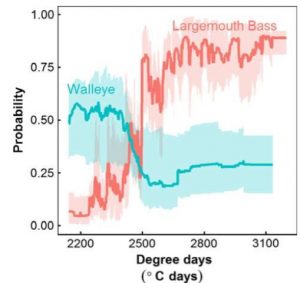 By using the water temperature model with air temperature predictions under climate change, Hansen and colleagues were able to predict whether lakes would support Largemouth Bass, Walleye, both, or neither in the future (2040-2064 or 2065-2089). It is important to note that most lakes in Wisconsin are not predicted to get too warm for adult Walleye to survive at any point in this century. The results of this study suggest that Walleye are much less likely to naturally reproduce as lakes get warmer, even though adult Walleye may be able to survive. The mechanisms explaining the observed negative effect of temperature on Walleye recruitment are unknown and the topic of ongoing research.

“By examining current and future impacts of environmental change on walleye populations,” says Hansen, “I hope we can draw attention to the rapid changes that are affecting entire lake ecosystems in the Midwest and around the world.” Hansen and colleagues created this website to explain their research and provide a map of which lakes they anticipate will support Walleye or Largemouth Bass; we highly recommend checking these websites out.

So, what can each of us do to avoid this fate? Slowing the rate of climate change by reducing greenhouse gas emissions is an important goal. The Environmental Protection Agency’s 25 steps to slow climate change provide good first steps that we can personally take; supporting candidates and policies at all levels of government to address climate change is also important.

Because Hansen and colleagues suspect that the cutoff between Walleye and Largemouth Bass is due to the survival of young Walleye from an egg through their first year of life, fisheries managers could supplement populations with failing natural reproduction in cases such as these through stocking from hatcheries. However, implementing such a program would be extraordinarily expensive and would not by itself address the other impacts of climate change. Taken together, all of the steps listed above are likely part of the solution to address the effects of climate change on our Walleye fisheries.