Dams have a variety of effects on a river. Changes in temperature, sediment transport, substrate composition, and discharge are just a few examples of how dams can impact fish habitat. When a dam is built, the resulting river channel downstream of the dam, or tailwater (Figure 1), has less habitat diversity ore and Shields 1995). Furthermore, dams schedule or regulate the release of water from the reservoir, meaning variations in the flow regime no longer impact natural seasonal traits of fishes. Regulated water releases create predictable, constant flows year-round. Overall, these affects can change entire aquatic insect and fish communities when an area becomes a tailwater. 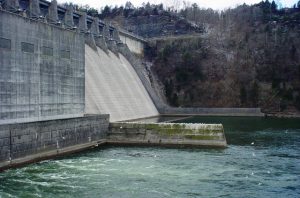 Water management in tailwaters typically follows anthropogenic demands. This dynamic environment benefits organisms that can quickly adapt to changing conditions. For example, fish found in tailwaters are generally cold-adapted species because the deeper, colder waters of the reservoir are released into the tailwater. However, the temperature can change depending on season or reservoir fullness. At maximum capacity, the reservoir might release cold water into the river, but as the reservoir is being drained these waters become relatively shallow and warm. Although the organisms in tailwaters need to be able to adapt, this habitat provides open water year-round that can provide excellent fishing in hot or cold conditions because of the stabilizing water temperatures being input from the reservoir. Not only that, but tailwaters provide predators abundant forage. An inundation of forage means predators can grow large. These factors lead to tailwaters being some of the most popular fishing locations that can be found.

The brown trout (Salmo trutta; Figure 2) is a highly sought-after sportfish native to Europe and introduced across much of the continental United States for recreational fishing. Growing sometimes up to 18.6 kg (41 lbs) and 100 cm (40 in) these trout are known for their ability to reach large sizes and their penchant for eating fish (piscivory; Figure 3). Brown trout also have a unique adaptability to their environment. Not only are they well adapted to warmer waters than some native coldwater fish, but they also can spawn in habitat that is otherwise unsuitable to the other commonly found trout species (Lee and Rinne 1980). 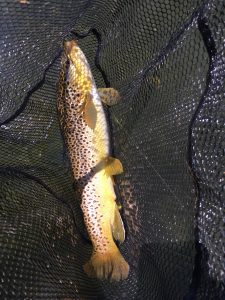 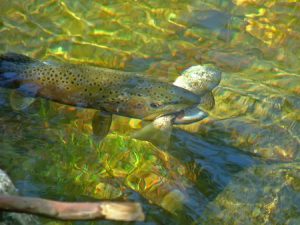 Brown trout thrive in many tailwaters. Degraded habitat in tailwater fisheries may make the substrate or temperature unsuitable for native fish to spawn. For example, poor spawning substrate in the Green River, UT for native cutthroat trout and introduced rainbow trout means the only naturally reproducing trout is the brown trout. In these cases, the angling opportunity created with tailwater brown trout can be beneficial to the managing state and the surrounding community. The Green River tailwater below Flaming Gorge Reservoir (Figure 4) is an example of a tailwater creating a highly productive fishery from a degraded tailwater. A population of large adult brown trout exists that brings anglers from many locations. A unique combination of size, versatility and aggressiveness make brown trout ideal tailwater sportfish. 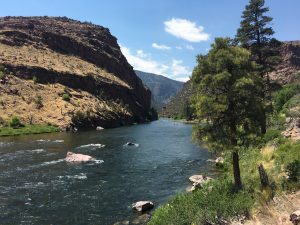 Tailwaters and brown trout might not be a conservation minded pairing, although sometimes they make an artificial pairing that few other fisheries match. When native species restoration is desired, dam removals are an increasingly common occurrence. Yet, removal efforts are difficult and expensive. Native fish and habitat restoration should be given careful consideration to tailwaters where it is shown to be a viable option. In the infrequent scenarios where tailwater habitats can support native fish communities, it may be desirable to manage these with conservation in mind.