Fighting fish with fish: How biocontrol offers a powerful tool in the invasive removal toolbox

Removing invasive fish species to aid native fish populations is easier said than done. System-wide removal of invasive fish with current removal methods (i.e., electrofishing, poisons, or netting) can be difficult and may harm the native residents. To reduce damage to native populations, fisheries researchers are pursuing new, species-specific removal methods for invasive species. One targeted method is biological control (biocontrol), using living organisms to remove a specific species. Over the last 20 years, researchers have explored a counterintuitive spin on biocontrol—they are targeting invasive fish by stocking more fish of the same species. The Sterile male (SM), Daughterless Carp (DC), and the Trojan-Y Chromosome (TYC) techniques all hijack invasive fishes’ reproduction systems. Although each method employs a different manipulation, researchers hope they all reach the same conclusion—the elimination of the invasive population. In this blog, I will summarize how each of these approaches work.

Sterile males are produced in a variety of ways, but generally, while they are still eggs, they are “shocked” with chemicals or high temperature at the time of fertilization. Once “shocked,” these eggs develop into sterile males, which are then stocked into waterways with the aim of reducing the number of offspring a population produces. Sterile males compete for spawning females, and if successful, the eggs they fertilize do not hatch. Fisheries managers in the Great Lakes implemented SM introductions to augment normal removal methods of Sea Lamprey (Figure 1). Managers have found that adding this technique to current removal options allowed them to successfully manage sea lamprey populations. However, managers have been unable to completely eradicate sea lampreys due to the large population and lack of additional males to sterilize1. 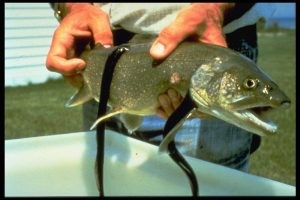 Another biocontrol method is the Daughterless Carp strategy. Instead of reducing the number of offspring, this strategy introduces a gene into the population that will only allow for male offspring to be produced. The gene inhibits estrogen production, which prevents embryos from developing into females. If DC fish are released, the gene would spread through the population and female fish would mate themselves out of existence. Without females for reproduction, the population would cease to exist when the last male dies or is removed. This strategy comes with a Catch 22—if the gene propagates outside of the target population, it would spread and extirpate untargeted populations. Therefore, DC is best applied in isolated areas or populations where there is no chance of unwanted spread. As of now, DC has only been tested in a laboratory setting, but the idea holds potential to completely eradicate invasive fish populations2.

As an alternative to the DC strategy, the Trojan-Y Chromosome approach also theoretically causes extinction by shifting the sex ratio to all males. However, the underlying mechanism to shift the ratio is different. Like humans, many fish species have two chromosomes that determine sex, which can be XX (female) or XY (male). Researches have used this to their advantage and created male fish with two Y chromosomes by feminizing male fish with chemicals (allowing XY fish to produce eggs) and spawning these fish with regular males. One-quarter of the subsequent progeny are YY males. Since these fish only have Y chromosomes to pass down, any offspring they have with a wild female (XX) will be XY males. As more YY fish are stocked and reproduce, relatively fewer and fewer females will exist. Like DC, the population would cease to exist when the last male dies or is removed. Unlike DC, there is no risk of a gene propagating outside of the targeted population because TYC does not spread but requires continued stocking of YY fish. This strategy is currently being tested on Brook Trout and could be a viable option for managers trying to conserve native fishes3 (Figure 2). 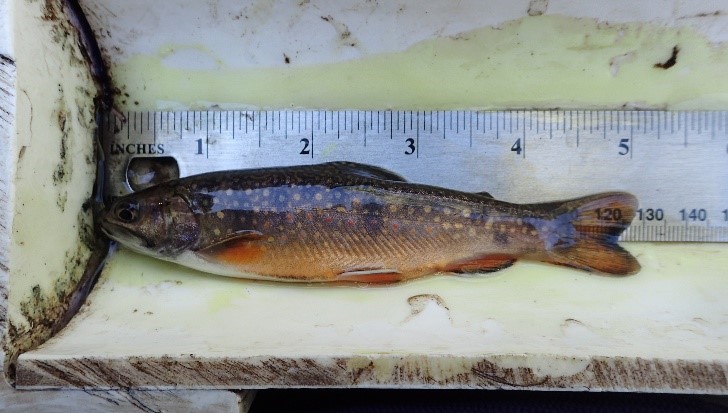 All three of these biocontrol methods theoretically take years or decades to reduce the invasive population. However, if researchers and managers integrate these biocontrol methods with current removal methods they theoretically can reduce the time to extirpate invasive species. Biocontrol methods still need refining and field testing because their efficacy for eradicating invasive populations is still mostly unknown. So far, on-going research indicates these options offer an additional tool for removal of invasive fish. One thing is certain, if harmful invasive species prevail, they will continue to hurt native fisheries and ecosystems. Luckily, researchers and managers are doing their best give them a fin up!