In May 2000, President Clinton signed Executive Order 13158 establishing the federal framework for marine protected areas within U.S. waters. This built upon previous legislation including the National Marine Sanctuaries Act, the Magnuson-Stevens Fishery Conservation and Management Act, and the Marine Mammal Protection Act. The stated purpose of the Order was to protect the “significant natural and cultural resources within the marine environment” for the sustained benefit of both current and future generations of Americans. The Executive Order aimed to reach this goal by expanding and strengthening a federal network of marine protected areas based on scientific information to identify and prioritize key habitats. 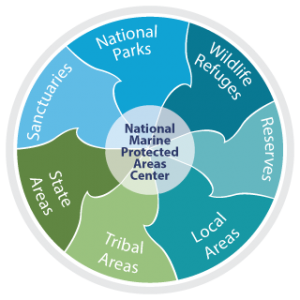 Marine protected areas are spatially designated portions of ocean designed to facilitate conservation though limiting resource use or extraction. Marine protected areas vary in the degree of restriction from areas of full protection, also called marine reserves, to areas that may simply restrict the type of gear used in fishing or prohibit commercial catch. The geographical focus of marine protected areas is built upon the relationship between healthy habitats and healthy animal populations and is often focused on critical coastal regions that may include coral reefs or mangrove forests. Due to this core theory of protecting habitat, it may be necessary to develop a network of adjacent reserves that protect critical areas that are utilized at different seasons or life-stages for target species. There are a variety of research projects being conducted in an effort to improve the process of identifying the priority areas for projection (see previous blog post that discussed critical areas for migratory shark species here).

However, from a federal policy perspective, marine protected areas are not only about conserving critical ecosystems, but also maintaining significant cultural sites. For example, the first U.S. marine sanctuary was established in 1975 to preserve the USS Monitor wreck; an ironclad warship built during the American Civil War.

An example of a marine protected area with the integrated purpose of protecting both ecosystem and culture is the Papahānaumokuākea Marine National Monument. Originally established in 2006 under the Bush administration, the Papahānaumokuākea Monument was expanded in 2016 by President Obama to include over 582,000 square miles of ocean in the Pacific. This expansion makes it one of the largest marine conservation sites in the world and the largest fully protected area in U.S. waters. The United Nations Educational, Scientific and Cultural Organization (UNESCO) considers the Papahānaumokuākea Monument a “mixed” World Heritage Site because it addresses both naturally and culturally significant features.

The mission of the Papahānaumokuākea Monument is to protect the “ecosystems, Native Hawaiian culture, and heritage resources” in an integrated management process. This process includes a unique co-management structure wherein daily management is shared between seven members including representatives from the National Oceanographic and Atmospheric Administration, the U.S. Fish and Wildlife Service, and the State of Hawai’i. This co-management structure allows for each member to oversee areas related to their expertise while ensuring that there is a process for shared decision-making. 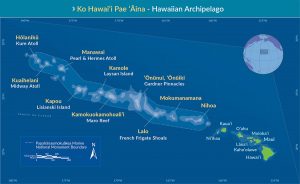 In addition to protecting historical features such as shipwrecks and Hawaiian cultural sites, the Papahānaumokuākea Monument is positioned to provide unique research opportunities within the largest coral reef in U.S. waters. Genetic research is underway to determine the level of population connectivity between the Monument and the Main Hawaiian Islands for a variety of fish and invertebrate species. Telemetry studies are assessing the movement patterns of top predators, such as sharks, to determine how they utilize the protected habitat. These, along with a variety of other projects, will serve to deepen our understanding of the marine environment and supply knowledge that may help inform management decisions both within the U.S. and across the world.