In recent years, shark populations have seen a significant decline due to a variety of factors including fishing pressure. Highly migratory, large bodied sharks are particularly susceptible to fishing pressure due to the wide range of regulations governing the waters in which these fish swim. Many shark species may experience population declines with even moderate levels of exploitation, because they have low rates of reproduction and it takes longer for the population to recover from fishing pressure. Sharks are affected by fishing either through targeted fishing, for use in fin and meat markets, or through incidental by-catch (accidental capture of non-targeted and typically non-marketable species). 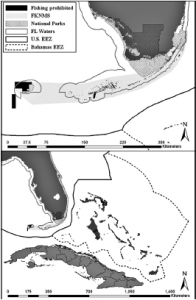 Marine Protected Areas (MPAs) are established boundaries in marine waters that provide restrictions on access and resource use, and are often utilized to protect certain bottom habitats utilized by sedentary fish species, such as coral reefs. While MPAs have proven to be an effective management strategy for coral reef systems, it is unclear how these areas of protection could influence highly migratory species such as sharks. To that end, Graham et al. (2016) evaluated how well current MPAs and the US Exclusive Economic Zone (EEZ) covered core habitat use areas (CHUA) for three migratory shark species. EEZs are areas of coastal waters that are considered to be the territory of the adjacent country and therefore resource use in EEZs is typically regulated and managed by the adjacent country. Because the United States has authority over activity within the EEZ, the federal government could establish fishing regulations to protect shark species. These current and potential MPAs were evaluated for their ability to protect core habitat for three species of shark: Bull Shark (Carcharhinus leucas), Great Hammerhead Shark (Sphyrna mokarran) and Tiger Shark (Galeocerdo cuvier). Utilizing satellite tags and spatial analysis, Graham et al. determined the percent of total CHUAs that were covered by the MPAs and EEZs. CHUAs are specific areas of the shark’s habitat that are important for key life functions such as feeding, breeding, and pupping. While it has been argued that MPAs do not afford any benefits for migratory species, this study explored the possibility that MPAs may, if located appropriately, protect core habitat during critical life stages of these shark species.

A total of eighty-six sharks were fitted with satellite tags during the sampling period that ran from 2010-2013, resulting in a total of 9,417 tracking days. Twenty-four of the sharks were Bull Sharks, eighteen were Great Hammerhead Sharks, and forty-four were Tiger Sharks. These three species of sharks were selected for this study because of their highly mobile nature and because they were expected to occupy overlapping sections of the coastal environment. Additionally, the sharks were expected to have different sizes of home range and face different levels of exploitation risk from both recreational and commercial fisheries. 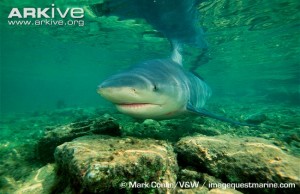 The results of the study showed that Bull Sharks, known to prefer coastal waters within the continental shelf, remained almost exclusively within Florida state waters. The CHUAs for Bull sharks were located within state waters and two national park boundaries. Since both recreational and commercial fishing for Bull sharks occur within these waters, regulation of fishing practices could lead to protection of the core habitat areas. 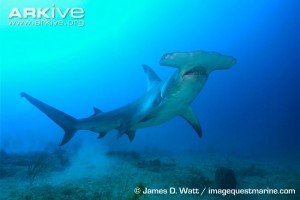 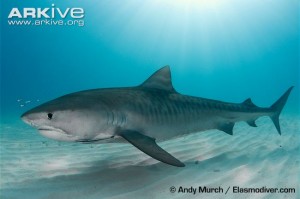 Tiger Sharks are also protected in Florida state waters, but those waters only contain 2.3% of their CHUAs. If protection for Tiger Sharks were to be granted at the federal level, 100% of their CHUAs would be covered and likely have significant positive influence on the conservation of this species.

Despite a relatively small amount of time being spent in Florida waters by Tiger Sharks and Great Hammerhead Sharks, protection in these areas is still important when considering the vulnerability of these species. This study demonstrates that if protection of these species is extended to federal waters, 100% of the core habitat areas for these sharks will be included.