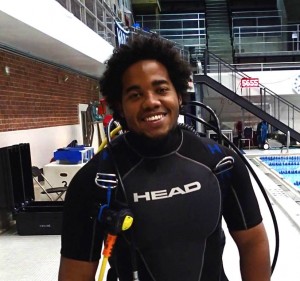 Sometimes to save the thing you love most, you have to leave it behind. That is exactly what Ruleo Camacho did when he left his home in Antigua and traveled to Maine, USA on a Fulbright Foreign Scholarship. Ruleo’s devotion to Antigua’s coral reefs took him on an unusual journey after he was accepted to the dual-degree master’s program at the University of Maine where he studies both marine biology and marine policy. This dual-degree program allows him to not only explore the biological reasons behind the degradation of Antigua’s coral reef systems, but also learn about the management implications of local fishing practices. “The human element can be a critical source of information and understanding in research. Through collaborations with stakeholders, research is likely to be more efficient and better accepted by the personnel to whom you are aiming to affect.” This combined biology and policy approach is helping him to contribute useful research to a complicated, close-to-home problem. 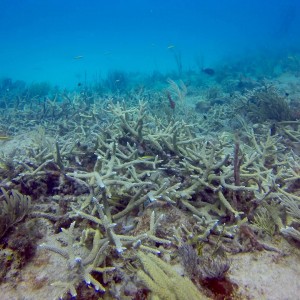 Antiguan coral: An example of a coral reef habitat in Antigua (Photo courtesy of R. Camacho).

While on campus in Maine, Ruleo focuses his studies on ecology, coupled natural and human systems, and applied marine policy. This has allowed him to acquire the knowledge needed to analyze and interpret the results and implications of his research. Throughout the summer months, Ruleo returns to Antiguan waters to conduct a marine reserve field experiments and conduct interviews with local fishermen. This schedule is demanding but exciting.

Including local fishermen in the conversation is critical to the success of Ruleo’s research because the underlying problem in Antigua is the removal of herbivorous fish due to unmanaged fishing practices. “The top-down governmental management of marine resources has failed due to lack of financial resources. Through placing the responsibility of management into the hands of the primary stakeholders, the fishermen, you remove the dependency on financial help and allow the fishermen to have a greater say and greater ability to protect their future.” Part of Ruleo’s plan is co-developing a No-Take marine reserve in cooperation with local fishermen to protect herbivorous fish such as parrotfish (Family Scaridae). 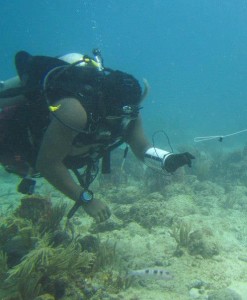 When herbivores (in Antigua, there are about 10 species of parrotfish that consume macroalgae) are removed from the system, it allows the macro-algal community to take over the reef, similar to weeds in a garden, changing the habitat and resulting in a less productive ecosystem. Parrotfish are considered keystone animals; a species that plays an important role in maintaining the habitat and ecosystem functions. The presence of herbivorous fish is vital in maintaining a healthy reef environment, which provides habitat for many other species including fish and invertebrates. If the numbers of herbivores are allowed to increase within the reserve site, Ruleo anticipates there will be a spillover of fish into surrounding unprotected areas resulting in a more productive system in the long-term.

Challenges abound for the young marine biologist, but perseverance plays a key role in marine conservation. Ruleo’s work is setting the stage for future conversations with Antiguan fishermen to consider working together with researchers and managers to better maximize their fish harvest while encouraging healthy reef systems. “I hope to continue talks with the fishing community about the importance of the reserve and the possibility of not only expanding it, but also creating other reserves around the island.” While there is still much to be accomplished in Antigua, we can be confident that Ruleo Camacho will be fighting hard to improve not only the health and security of his local reefs, but also the livelihoods of the fishermen who rely upon them.

Also, check out this video by Ruleo that shows parrotfish feeding on algae!