Under the current climate change regime, mean global air temperatures are predicted to increase over the next hundred years, with some models estimating as much as a 6.4 oC increase worldwide. This warming trend is currently being observed, as we experienced 15 out of the 16 warmest years on record since 1880, all after 2001. The hottest year yet, 2015, broke the previous high set in 2014 by a record difference of 0.13 oC. While a warming Planet Earth will have widespread effects on human life and civilization, fish and wildlife will also be impacted significantly. Both terrestrial and aquatic life forms have strong and complex links to climate variables such as temperature and precipitation, and it is highly likely global biodiversity will be changed by a warming environment. Freshwater ecosystems are considered to be among the most vulnerable habitats to global climate change, and could undergo multilevel chemical, physical, and biological transformations if waters warm. 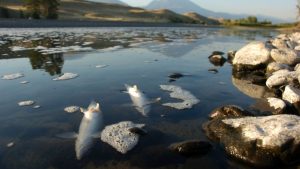 Warm water temperatures may be partly to blame for a major August 2016 fish kill in the Yellowstone River that left more than 10,000 whitefish and trout dead and led the Montana governor to declare a state of emergency. While the microscopic parasite that causes Proliferative Kidney Disease is known to impact whitefish and trout in the US and Canada, the effect of the disease on Yellowstone River fish populations this August is thought to have been  exacerbated by high water temperatures, as well as  other co-stressors such as record low flows and recreational activity. Higher water temperature has been linked to is increased prevalence of fish disease and parasitism, and the introduction of foreign pathogens might be correlated to warming conditions (Marcogliese 2001, Marcos-Lopez et al. 2010). Fish exposed to high temperatures or low oxygen conditions are less tolerant to environmental stress and susceptible to disease (Langford 1983). In response to the kill, 183 miles of the river has been closed to the public. This is one examples of an economic implication of increased freshwater temperatures, that also impact municipal and industrial water management, agriculture, fisheries, and recreation.

Increased temperatures in freshwater habitat will have chemical and physical effects as well. Chemical effects of higher temperatures include decreased dissolved oxygen, increased toxicity of pollutants, and increased salinization of arid streams, such as those in the Southwestern United States. Water levels in some rivers, lakes, and streams could be reduced if increased rates of evaporation lead to desiccation in places and times that don’t usually go dry. These physical changes could reduce populations of fish and other aquatic species because of limited space and resources.  However, if rates of biological productivity are higher under warmer temperatures, resources could increase. How these seemingly contradictory effects of increased temperatures on resource availability will interact is an important research question for fish habitat conservation.

Rising freshwater temperatures will affect aquatic biodiversity directly. For fish and other cold-blooded organisms, the biochemical reactions of life are directly correlated to the temperature of the surrounding environment (Sweeney et al. 1992; Rahel 2002). Thus, temperature impacts almost all aspects of fish physiology, from growth and reproduction to activity and behavior. The community of organisms residing in a stream could change dramatically if temperatures rise above critical thermal maxima for any given species. However, not all fish will be impacted equally. Fish with narrow environmental tolerances, those at the edge of their ranges, dependent on seasonal or climactic triggers to life history events such as migration or reproduction, or with poor capacity to adapt or disperse to more suitable areas are considered highly vulnerable. Fish adapted to cold and cool waters for example may be at greater risk of habitat loss. Some estimates predict that increasing temperatures in North American streams could result in a 50% decrease of cold and coolwater fish habitat (Eaton and Scheller 1996). 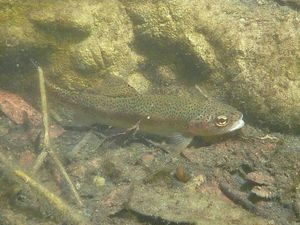 The federally endangered Southern California Steelhead Trout is one such fish vulnerable to increased stream temperatures. At the southern edge of its geographic range, this salmonid is facing higher temperatures and low flow conditions that leave some habitats completely dry. Historically, ocean migration would be one way these fish could avoid catastrophic population decline due to changing conditions in freshwater habitat. However, connectivity from river to ocean in many southern California coastal streams has been cut off by drought conditions, a synergistic combination of high temperatures and low precipitation that could prove fatal to these fish. In some streams, the trout are being crowded out by non-native cyprinids such as carp, which are tolerant to a much wider range of temperatures and are expanding in range. Species composition changes forced by altered temperature conditions may require us to reconsider the role of non-native species in ecosystems.

The effects of increased temperature on freshwater habitat are complex, synergistic, and happening now. Effective fish habitat conservation will need to account for a warmer water future to ensure fish health and population stability for years to come.