Humans have long relied on coastal environments. Whether it be a family enjoying a relaxing day at the beach, or a multi-billion dollar company loading a ship that will carry their goods to consumers on the other side of the world, coasts are incredibly important. Many animals also rely on ecosystems located on coastlines. In particular, estuaries (where freshwater ecosystems transition to marine ecosystems) are highly productive ecosystems that are vital for a diverse array of animals, including many birds, waterfowl, and invertebrate species. Many marine fishes, such as English sole, use estuaries as nurseries, returning from marine environments to spawn and provide their young a safe place to develop. Unfortunately, human development around estuaries has threatened the productivity of these ecosystems, and potentially the animals that live there. However, interactions between multiple human-induced changes make it difficult to determine the exact effects that we are having on species in these ecosystems. As such, long-term studies investigating human impacts on estuaries, and the corresponding effects on animal populations would help us develop strategies to reduce further impacts on these important ecosystems and the animals that live there.

Figure 1. Map of sampling sites along the Pacific coast of the United States. Photo by Toft et al. (2018).

A group of researchers led by Jason Toft from University of Washington led an investigation to study how human development impacts estuaries. They analysed how populations of juvenile fish and invertebrates from 20 estuaries located along the Pacific coast of the United States (Figure 1) changed over 25 years in relation to human-induced habitat changes. The researchers focused their analysis on seven species, which were either listed under the U.S. Endangered Species Act (Chinook salmon, coho salmon), are important commercial species (Dungeness crab, English sole, Pacific herring), or are important in estuarine food webs (shiner perch, Pacific staghorn sculpin). Population abundance was estimated by creating a dataset of 22 sampling programs across 1990–2014. They assessed human-induced ecosystem disturbances by scoring three different classes of human impacts: 1) land cover (level of development around the estuary); 2) water movement (changes in flow of water into the estuary); and 3) pollution (amount of pollution entering the estuary). The researchers then assessed whether any of these different classes of human impacts, in addition to the relative salinity of each estuary, predicted changes in abundance of the seven species across the 20 estuaries. 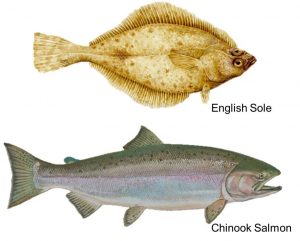 While measures of salinity predicted the presence or absence of almost all species, abundance of only two species could be predicted by the different human impact scores. Fewer Chinook salmon (Figure 2) were found in estuaries that received high pollution scores, and Chinook salmon were generally absent from estuaries with the highest pollution. This may indicate that Chinook salmon are the most sensitive to high levels of pollution of the seven species assessed. They also determined that abundance of English sole (Figure 2) was lower in estuaries where the surrounding area had been highly developed, as reflected in land cover scores. The authors suggest that this may reflect an inability to hide from predators. Developed areas tend to have armoured shorelines that prevent erosion; however, this also reduces amount of soft sediment on shorelines that juvenile English sole burrow into when escaping predators. Population abundance of the other 5 species could not be accurately determined using scores for any of the three categories of human impacts utilized in this study.

Humans and aquatic animals are intimately linked due to their shared reliance on ecosystems such as estuaries. As we continue to develop and change these ecosystems it is important that we are aware of the impacts that we are having on aquatic animals living there. By gaining a better understanding of how we are changing these environments, and how these changes are affecting animals living in these environments, we can hopefully modify our actions to reduce our impact.