Rocks in the river: How researchers are helping the recovery of the Great Lakes’ oldest fish

The St. Clair and Detroit Rivers have changed dramatically over the last century as construction of shipping canals have destroyed many of the natural limestone reefs and rocky features that were historically used by many species of fish as safe places to deposit their eggs.  Among the species that used these rocky structures were the angler-favored walleye (Sander vitreus), lake whitefish (Coregonus clupeaformis), and lake sturgeon (Acipenser fulvescens).  Lake sturgeon are an ancient species of fish that evolved with the dinosaurs, can grow over 6 feet (1.8 m) long, weigh up to 250 pounds (113 kg), and live for more than 100 years (Figure 1).  Loss of suitable spawning habitat is one of the major reasons that many Great Lakes fish, lake sturgeon especially, have experienced heavy losses over the last century. 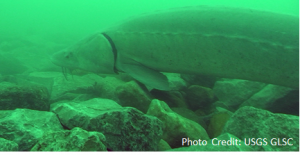 Although the lake sturgeon population in the St. Clair-Detroit River system is only 1/100th of its historic size, the system still supports the largest remaining population of lake sturgeon in all five of North America’s Great Lakes.  In an effort to help this incredible animal recover, scientists in the Great Lakes region are leading habitat restoration efforts in the St. Clair-Detroit Rivers for lake sturgeon and other fish that rely on the spaces in between large rocks, cobble, and stones that provide shelter for their eggs.

In 2004 a major reef-restoration project on the rivers began to reconstruct rocky reefs near historic spawning areas in an effort to provide more suitable habitat for these rock loving creatures (Figure 2).  Jason Fischer, a PhD student at the University of Toledo, and colleagues from a variety of Great Lakes science institutions conducted a study evaluating the use of these artificial spawning reefs by walleye, lake whitefish, and lake sturgeon.  The researchers monitored the spawning habits of these three species at sites throughout the St. Clair-Detroit Rivers including seven artificial reefs from 2005 to 2016.  They collected data by sampling sites for fish eggs and determined which conditions such as temperature, depth, water velocity, and reef presence appeared to be most important for explaining where each species’ eggs were found. 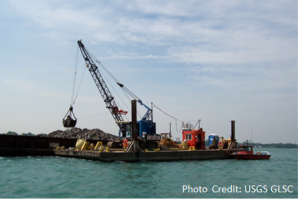 They found that lake whitefish and walleye eggs were most likely to be found in areas of high water velocity, but not necessarily on the artificial reefs.  However, 98% of lake sturgeon eggs were collected on the seven artificial spawning reefs, which led Fischer and his colleagues to conclude that the reef restoration projects are important for helping the recovery of this long-lived fish species.  Their findings are in line with similar observations others have made where lake sturgeon routinely use artificial reefs for spawning such as in the Des Prairies River in Quebec and in the St. Lawrence River in New York (Dumont et al. 2011; Johnson et al. 2006).  Recovery efforts for long-lived species are always challenging, but this study adds to the body of evidence that habitat restoration projects can work for lake sturgeon.  These encouraging insights are an important step towards helping this dinosaur-era creature return to other areas where its habitat has been lost.