Antarctica, the coldest, driest and windiest continent, is a relatively untouched ecosystem. However, global climate patterns can interact in interesting ways to result in strange patterns in ice at the poles. 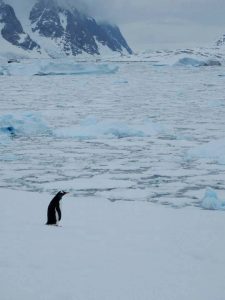 Overcast day in the Western Antarctic peninsula with a Chinstrap penguin. Photo by Cecilia O’Leary.

Generally, when discussing ice in the Antarctic, we are talking about 3 types of ice: sea ice, ice shelves, and the ice sheet (land ice). We know that the Arctic has decreasing ice cover. The Antarctic, on the other hand, sends a much more mixed message. The general trend is that Antarctic sea ice is increasing and land/ice and ice shelves are decreasing (To learn more about this go here Scripps Glaciology Group or here The Gonzo Scientist).

From 2001-2002, two climate cycles have interacted to result in melting glaciers, thinning lake ice and sea ice: the Southern Annular Mode (SAM) and the El Niño Southern Oscillation (ENSO). SAM is a belt of westerly winds that move around Antarctica that can vary on time-scales of weeks to years. This variation influences the strength and position of cold fronts. ENSO is variation in the winds and sea surface temperature over the tropical eastern Pacific Ocean, which in turn can influence precipitation and ocean circulation around Antarctica (Carleton 2003). Two groups of scientists in the Antarctic based at Palmer Station Antarctica Long Term Ecological Research Sites (LTERs) are looking at ways that these two climate cycles and extent of sea ice influence marine ecology and the Antarctic food web.

The interaction of SAM and ENSO resulted in melting at the edge of the West Antarctic Peninsula during this period 2001-2002. Increased melting ice at the edges of the continent released large amounts of fresh water and ice algae (algae found within sea ice) into the upper layer of the Southern Ocean. This is a huge flush of nutrients into this region of the ocean (as the nutrients that were trapped in the sea ice now enter the ocean) that results in algal blooms and provides food for krill. Krill are a major food source for penguins, whales, seals, fish and seabirds. Despite the increased biomass algal blooms, reduced sea ice diminishes the available habitat to krill, which use sea ice in a crucial phase of their reproductive cycle. Krill are believed to overall be declining in the Antarctic since the 1970s, potentially due to fishing and/or climate change (Atkinson et al. 2004). 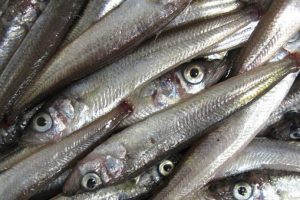 The Antarctic silverfish is a species that eats krill and is the prey of many larger species in the Antarctic food web such as seals, baleen whales (e.g. humpbacks), sea birds (e.g. snow petrel), toothed whales (e.g. orca) and penguins (e.g. Adelie penguin). This fish is considered the only truly pelagic fish in the Antarctic system and produces antifreeze proteins to help it survive the cold Antarctic waters. Antarctic silverfish may be affected by changes in krill abundance and climate in the coming years. These changes can potentially influence the mortality, reproduction, and connectivity of this fish species. Silverfish need sea ice for spawning, egg deposition and feeding grounds for their new larval fish.

A recent study examined the potential resilience of reproduction and early life stages of Antarctic silverfish to future changes in habitat availability and mortality. The study collected fish from two different areas in the Antarctic, Marguerite Bay and the Antarctic Sound, using sampling nets. The researchers measured fish size and other metrics that inform biologists of fish reproductive potential and status, such as gonad size and stage of maturity. By comparing traits of the Antarctic silverfish from these two locations, researchers were able to determine that silverfish have a substantial reproductive potential, which might help to mitigate reductions in habitat availability. However, the researchers warn that it will most likely not be enough to mitigate a catastrophic loss of spawning habitat. When considering this with other factors such as prey loss and pre-existing climate system interactions, it could be enough to be detrimental to a valuable piece of the Antarctic food web.