Submerged aquatic vegetation (SAV) are underwater plants that grow in shallow water and do not emerge above the surface. These areas are important nurseries for juvenile fish and provide refuge for smaller species of fish and invertebrates from predators (Figure 1). The plants improve water quality by providing oxygen and stabilizing the bottom, lowering turbidity levels (the murkiness of the water caused by suspended solids such as sediments). SAV also protects shoreline habitat from erosion by absorbing wave energy. 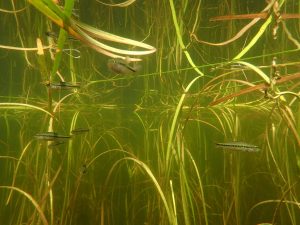 Despite its ecological importance, there has been a rapid decline of SAV in fresh, brackish and marine waters throughout North America. As SAV grows in shallow water, the survival of the plants depends on the amount of sunlight that reaches the bottom. SAV declines are often due to increased development in coastal areas, increased sedimentation and nutrient loading from agricultural areas, and the dredging of navigable channels. Hardened shorelines, such as riprap and bulkheads, also reduce SAV habitat by reflecting wave energy from the shoreline. This erodes sediments and deepens the water along the shoreline, making it less likely that sunlight will be able to reach the bottom.

Maumee Bay in western Lake Erie has experienced a decline in native SAV since the late 1880s. Over 90% of the Maumee River watershed is developed as agricultural land or urban areas. This has contributed to a large amount of sedimentation in the bay, increasing the turbidity and killing off SAV beds. Due to the degradation of aquatic habitat, Maumee Bay has been classified as an “Area of Concern” by the Great Lakes Water Quality Agreement between the United States and Canada. 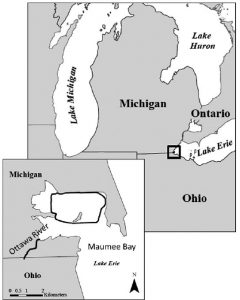 Figure 2. The location of the study area in Maumee Bay is outlined. Thirty-two transects were sampled to quantify fish abundance, 16 in SAV beds and 16 in open water. The Maumee River, the main source of agricultural runoff into the bay, is about 3 km south of the study area (from Miller et al. 2018).

During the summer of 2014, Jake Miller, Dr. Daniel Wiegmann and Dr. Jeffrey Miner from Bowling Green State University, and Dr. Patrick Kocovsky from the US Geological Survey’s Great Lakes Science Center examined the differences in fish communities between areas with and without SAV in Maumee Bay (Figure 2). They sampled fish abundance in SAV beds and turbid, open-water habitat using a metal-framed neuston net. A neuston net is a specialized net with a rectangular opening that is towed by a boat (Figure 3). SCUBA divers also randomly sampled the SAV species and benthic invertebrates to better characterize the habitats. The area of Maumee Bay that they sampled was quite shallow, with an average depth of 1-2 m. 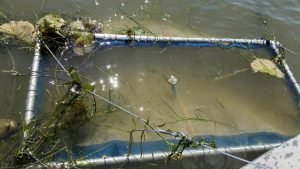 Figure 3. Neuston net after a trawl through a SAV bed. Photo by Jake Miller.

The researchers found that the species richness (number of different species) of fish was higher in the SAV beds than the open, unvegetated areas. The fish which made up the communities were also different between the two habitats. Centrarchids, including bluegill (Lepomis macrochirus), largemouth bass (Micropterus salmoides), and black crappie (Pomoxis nigromaculatus), dominated the SAV beds but were not common in the open water. In the open water habitat, spottail shiners (Notropis hudsonius), white perch (Morone americana; an invasive species in Lake Erie), and gizzard shad (Dorosoma cepedianum) were the predominant species (Figure 4). The researchers determined that SAV beds are a higher quality habitat than open waters. 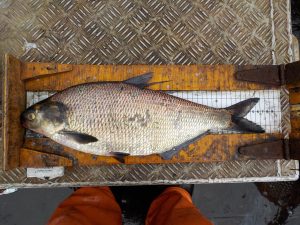 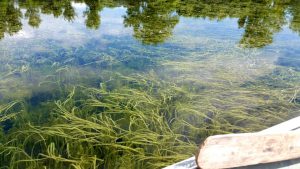 The SAV beds contained five species of plants, but the most common were wild celery (Vallisneria americana) and variable pondweed (Potamogeton gramineus; Figure 5). The predominant taxa of the invertebrate communities in all of the habitats sampled were chironomids (non-biting midge larvae) and oligochaetes (segmented worms).

In order to be delisted by the US Environmental Protection Agency, an Area of Concern has to demonstrate habitat improvement and a restoration of fish and wildlife populations, including bottom-dwelling organisms. The results of this study show that the fish communities greatly differed between SAV beds and adjacent turbid, open water habitat. Restoration efforts for SAV in degraded, shallow water estuaries could improve water quality and benefit a variety of species by providing important nursery habitat and refuge from predation.